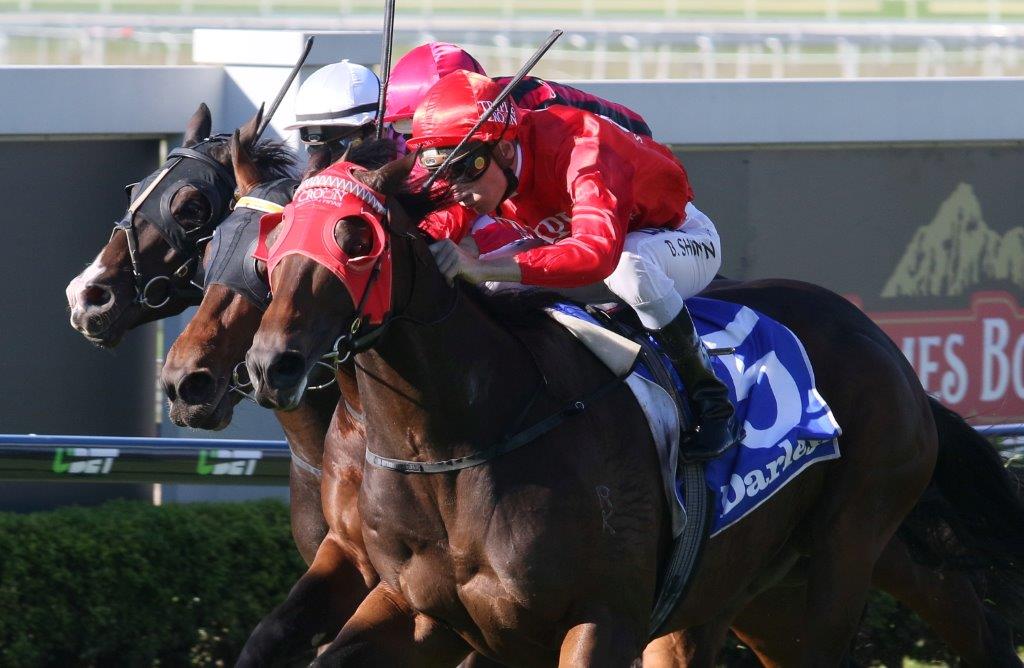 The Group 1 sprints of the Brisbane Winter Racing Carnival are now sure to feature the Peter & Paul Snowden-trained Sydney raider Charlie Boy after his success for the punters in the BRC Sprint 2015 on Doomben Cup Day.

Jockey Blake Shinn, having a roaring day on the Brisbane card having already won the Rough Habit with Sadler’s Lake and the Juanmo Stakes with another Snowden galloper I’ve Got The Looks, got Charlie Boy to settle well midfield after the gelding tried to over-race early with the blinkers on.Coming off a brave fifth behind superstar sprinter Our Boy Malachi in the Group 3 Hall Mark Stakes (1200m) at Randwick from April 18, the form of which the bookies rated, Team Snowden’s Myboycharlie four-year-old Charlie Boy jumped the punters’ pick in the $125,000 Group 3 Darley BRC Sprint (1350m) at Doomben Racecourse this weekend.

“I got into a good position after he over-raced a little with the blinkers on today,” Shinn said.

“But once he got comfortable he travelled beautifully.

“I got him into a lovely spot to pounce and he did a good job second-up that he’ll only improve on.”

The drought didn’t stop the money coming for him and he was able to break it thanks to a brilliant late burst.

It was the Lloyd Kennewell-trained Adelaide raider Nite Rocker, coming off a fifth back home from a fortnight back in the Listed City Of Adelaide Stakes (1400m), leading the BRC Sprint field around this winter.

He led at the first corner from Alma’s Fury and Final Crescendo who were both also right up on the pace after nice jumps.

Charlie Boy meanwhile was tracking mid field when Alma’s Fury hit the front on the inside approaching the corner with 500m left to go.

The favourite though had gotten the perfect run throughout from Shinn and he put in a sweeping run out wide around the bend to quickly move up and put them under pressure on the outside.

Eventually over the closing stages Charlie Boy ($3.70) took the lead from the Joe Pride-trained Rock Sturdy ($9.50) who was brave throughout after jumping from the outside barrier (13) second-up after a luckless eighth in the Hall Mark.

Rounding out the BRC Sprint trifecta in third was then Nite Rocker ($10) who was far from disgraced holding on to finish in the money, boxing on well to run a place at a good price after losing the lead late.