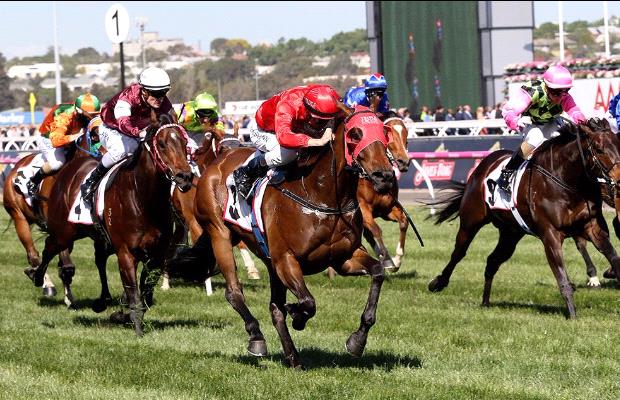 The Peter and Paul Snowden-trained Redzel showed his rivals a clean pair of heels to take out the $150,000 Listed Mumm Stakes (1000m) at Flemington on Thursday.

Jumping from the widest barrier Blake Shinn found the outside rail and despite being out there solo established a big enough break to hold off a fast finishing Terravista, prevailing by a half-head in a time of 56.72 seconds.

It was the fifth victory for Redzel from his 13 career starts, the four-year-old son of Snitzel winning four of his past six outings, since the stable elected to ride him for speed.

“It was our plan to go to the outside regardless of what else came with us.

“Let him roll and try and keep something up the sleeve for the last 100 knowing there was a couple of good backmarkers there in Hellbent and Terravista.”

Hugh Bowman obtained cover on the Joe Pride-trained Terravista ($3.70) but couldn’t get out early enough, screaming home to just miss whilst Darren Weir’s Hellbent ($2.60 fav) was under pressure a long way out before working home into third a further two lengths away.

But Shinn rolled the dice by going it alone down the outside rail and it proved a winning move.

“I just rode my own race,” Shinn said. “I flew the gates and got him into stride.

“I just wanted to be strong late because I knew I would be having Terravista and Hellbent coming at me.

“I had to rate him pretty carefully through those mid stages so that I could be strong to the line and fortunately he settled well for me, he worked with me and it was a great result.”

Redzel finished eighth in the Group I Moir Stakes (1000m) at his previous start but wasn’t beaten far, Snowden confident that he will make the grade.

“He’s proven at this level now,” Snowden said. “He’s been going through his grades up until now but beating handy horses and racing well against them so he’s earned his ticket to take on these sort of races on now.”