Another Magic result as Missile Mantra sells for $950,000 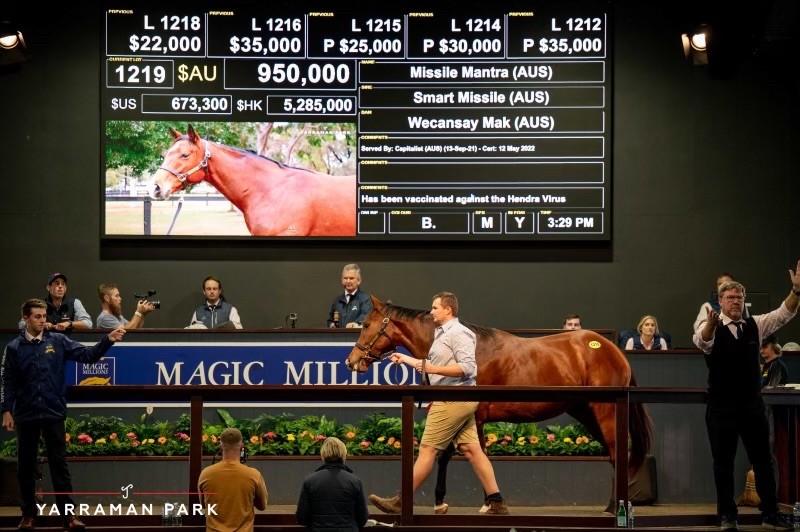 Less than 48 hours after Reelem In Ruby sold for $950k, the Triple Crown team scored another huge result in the sales ring when MISSILE MANTRA sold for the exact same figure at the Magic Millions National Broodmare Sale.

Purchased by Chris & Michael Ward for just $30,000 as a yearling , Missile Mantra earned more than $600,000 in prizemoney during a glittering career on the track, one which saw her come agonizingly close to Group 1 glory when beaten a nose in the Thousand Guineas at Caulfield.

Prepared for auction by Yarraman Park and offered in foal to gun young sire Capitalist, Missile Mantra was purchased by Bahen Bloodstock and will likely be served by leading stallion I Am Invincible during the upcoming breeding season.

Missile Mantra’s racing career got off to the best possible start, winning her first two starts as a 2YO including a Listed success in the Redoute’s Choice Stakes.

Her enormous Thousand Guineas placing was the highlight of a luckless 3YO Campaign, but Missile Mantra trained on as a 4YO to win the Group 3 Summoned Stakes, as well as placings in the Group 2 Kingston Town Stakes, Group 3 Dark Jewel Classic and Listed Anniversary Vase.

She was an absolute ripper on the track and a hallmark of her racing career was her electric turn of foot, a trait which we are sure she will pass on to her progeny.

A big congratulations to all Missile Mantra’s owners and a huge thank you to all the team at Yarraman Park Stud for their efforts in presenting both of these star mares for auction.

A special mention goes to the team at Snowden Racing Flemington, who looked after Missile Mantra for most of her racing career, as well as Rosemont Stud, Muskoka Farm and everyone who played a part in her most memorable journey.

← Magic result on the Gold Coast as Reelem in Ruby sells for $950,000
Dubai Showgirl breaks through with a dominant display →
Tweets by @TripleCrownSynd