Impressive wins from both MAZU and EXOBOOM ensured it was an afternoon to remember for the Triple Crown team on Saturday, with the high-class pair bringing up a quickfire double at Royal Randwick.

Mazu was first into the winner’s enclosure after running out a dominant winner of the Listed Brian Crowley Stakes, a race that Triple Crown also won back in 2011 with subsequent Group 1 winner Hot Snitzel.

A striking son of Maurice, Mazu had given an early indication of his potential to be high class when flashing home for third in the Group 3 Pago Pago Stakes on just his second career start, but his tendency to over-race had cost him dearly in his three starts prior to Saturday’s first success at Stakes level.

Benefitting from a terrific Sam Clipperton ride, Mazu simply had too much class for his rivals and won handsomely to deliver Maurice his first Stakes winner on Australian shores.

“It’s certainly a shandy of what he has to offer, but we’ll take it anyway,” co-trainer Paul Snowden said.

“He’s got plenty there to give. He should be running in the Coolmore next week, that’s the amount of ability he has.

“Hopefully we’ll see that come to fruition later in the year.”

Another stakes winner for @TripleCrownSynd with Mazu proving too strong in the Listed Daily Press Brian Crowley S. at @royalrandwick. A ½ brother to Champion 2YO Filly Headway, Mazu was sold by @ParsonsCrkFarm for $180k at the 2020 @inglis_sales Classic YS #ItPaysToBuyAustralian pic.twitter.com/aQdDHVgB4p

Less than two hours later, Mazu’s stablemate EXOBOOM made it a memorable double on the day with a come-from-behind victory in the Filante Handicap, securing himself a spot in Saturday’s $7.5m Golden Eagle in the process.

The powerful four-year-old made a sustained run down the outside to reel in some talented rivals, with Sam Clipperton once again timing his run to perfection aboard the big son of Exosphere.

A winner of the Group 3 Hawkesbury Guineas earlier in the year, Exoboom will now contest Saturday’s lucrative Golden Eagle, much to the delight of his co-trainer Paul Snowden. 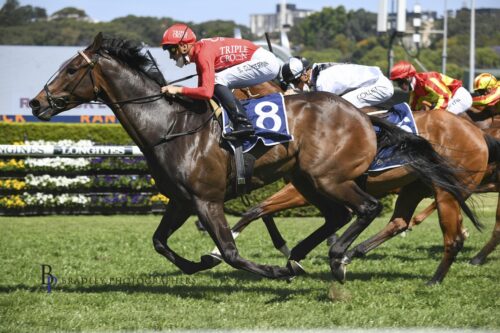 Exoboom flies down the outside for an impressive success – Bradley Photos

“This horse is only starting to come to his top now and that will top him off for next week,” he said.

“He’ll give it (the Golden Eagle) one hell of a shake. As long as we can draw well and those sorts of things that line up on the day that are the difference between winning and losing.

“He’s always been a talent. He’s a big bugger, a big animal and he takes a lot of work.

“We just believe that today, and his next run, they’re going to be the best of his preparation, so we’ll see how we go again next week.”

Next stop, #TheGoldenEagle for @SnowdenRacing1 gelding Exoboom after his win in the Filante Handicap at Randwick. He finished over the top of Yamazaki and Bergen to the the 1400m event. @tabcomau @TripleCrownSynd pic.twitter.com/3XuxGHxwHL

A huge well done to all the team at Snowden Racing for getting these two high quality horses to peak on the day.

A big congratulations also goes out to both sets of owners, many of whom were trackside on Saturday to roar home their respective winners. 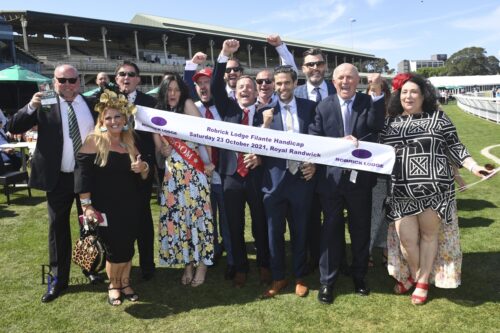 There’s nothing quite like a winner! Exoboom’s owners celebrate his Randwick win – Bradley Photos