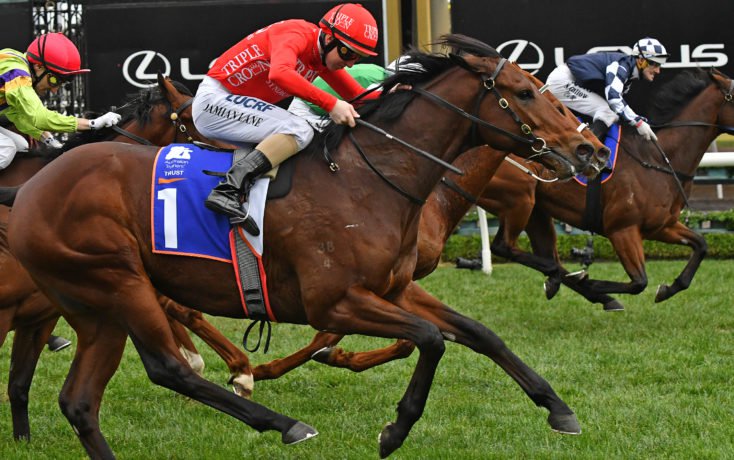 BRAVE SONG battled hard to take a first Stakes victory in a thrilling finish to the Listed Village Stakes at Caulfield, continuing a remarkable week for Triple Crown and their owners.

A $67,500 purchase from the Inglis Classic Sale, Brave Song is the leading prizemoney earner of his sire, Widden Stud’s Your Song, with victory taking his career earnings to $340,720.

The four-year-old had been knocking on the door of Stakes success after placed efforts in the Group 3 Eskimo Prince and twice at Stakes level this preparation.

Yet Brave Song was not to be denied this Spring Carnival, as he turned the tables on Trekking and defeated Group 3 winner Addictive Nature by half a length to emerge victorious.

.@jivil10 on the money with Brave Song. So Si Bon also ran a race! pic.twitter.com/Nxd4UZdVJw

Jumping well from the inside barrier James McDonald positioned Brave Song just off the speed and when the split came he ruthlessly exploited the gap to take a fifth career victory from 13 starts.

“He didn’t get much luck last time, he was wide and didn’t have the best run,” said McDonald. “It was great to see him turn the tables today.

“He had a soft run and gave a good kick when the split came and was strong to the line.”