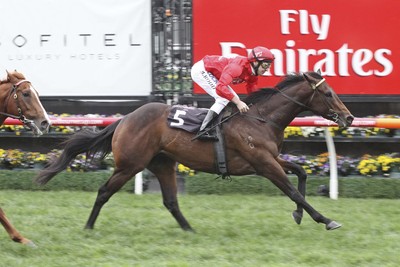 Michael Rodd is bullyish about Charlie Boy’s prospects in Saturday week’s Magic Millions 3YO Guineas (1400 m) after his trial today at Randwick.

Charlie Boy, rated a $9 chance in the $1 million race, ran third behind Charge Account and Knight Exemplar in the fastest of the 1050 metre trial.

The Gerald Ryan-trained colt hasn’t started since he ran seventh behind Long John in the Caulfield Guineas.

Charlie Boy won a trial at Rosehill on Christmas eve, but today’s trial was far stronger.

“He sat back and hit the line really good in what obviously was a pretty hot trial, I’m really happy with him,” Rodd said.

“He does need room. When he won in the Danehill, he didn’t look like he was going to do anything until he got back to the inside where there was no horses around him and then he really hit the line strongly.

“He has a lot of class, but be just needs a bit of galloping room to do his best.

“He got absolutely belted in the Caulfield Guineas. All four legs got lifted off the ground coming around the home turn.”

Although Charlie Boy goes into the Magic Millions 3YO Guineas first up, Rodd noted that the colt has two wins and a third from his three first-up starts.