Charlie could be the boy for Guineas

By Michael Sharkie
The Age 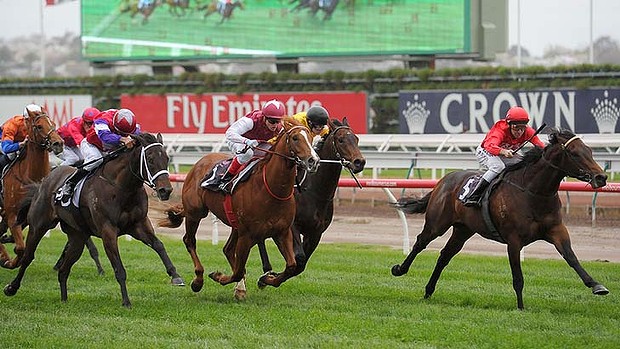 As the connections of early Caulfield Guineas favourites Prince Harada and Fast ‘n’ Rocking watched from the sidelines, the second tier of challengers were on show at Flemington on Saturday with Danehill Stakes winner Charlie Boy emerging as a hope in the stallion-making classic.
Touted by trainer Gerald Ryan as a Golden Slipper contender earlier this year before finishing midfield, Charlie Boy may yet realise his potential this spring.

If the leading Guineas contenders had begun to clear out from the pack, then Charlie Boy, who started at $21, certainly bridged the gap with his Danehill win and could make further ground on Prince Harada and Fast ‘n’ Rocking when he runs next in the Guineas Prelude in a fortnight.

The group 2 success was the latest feature-race triumph for Sydney-based group Triple Crown Syndications, whose bright red colours were in the winner’s stall for a Flemington group 2 for the second time this year after filly Flying Snitzel’s win in the Kewney Stakes in March.

Brothers Michael and Chris Ward grew up on a thoroughbred farm in country New South Wales before making their money in finance, but the lure of the turf was too much to resist.

”Gerald has been saying for a while that he [Charlie Boy] has significantly improved this prep and the win was testament to that,” Chris Ward said.

”We got him out of the Newhaven draft at the Magic Millions, he’s a cracking sort and has given the owners the ride of a lifetime.

”You can’t ask for anything better than winning a race like that on a big day like today.”

The three-quarters of a length margin to runner-up Kiss A Rose ($16), with a head to third-placed Eclair Big Bang ($18), flattered the placegetters somewhat as Scobie Breasley medallist Michael Rodd had Charlie Boy well in control of the race over the final 100 metres.

”It was pretty arrogant in the end, he got to the front and wanted to roll around a little bit and he’s going to be suited when he gets over a bit further,” Rodd said.

The Guineas is also the target for Eclair Big Bang, who impressed his trainer Phillip Stokes.

Kiss A Rose and Gregers will continue on towards the Thousand Guineas, with the Tranquil Star Stakes (1400metres) the defining race in their preparation.