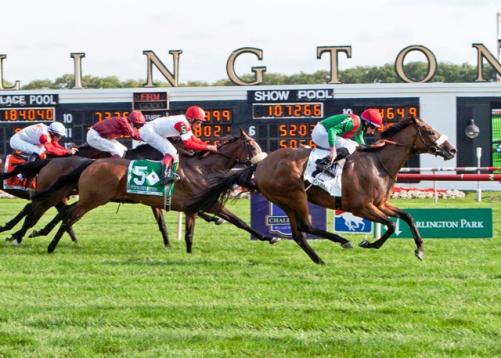 MYBOYCHARLIE’S northern hemisphere first-crop sensation Euro Charline’s chances of winning herself a coveted Eclipse Award will be further enhanced with victory in next month’s Grade 1 Queen Elizabeth Challenge Cup at Keeneland in Kentucky.

The Team Valor charge is already one of the front runners for the Award after her historic win the Beverely D Stakes at Grade 1 level at her most recent appearance, her last start while trained by Marco Botti.

Euro Charlie has since teamed up with More Than Ready and Pluck’s Hall Of Fame trainer Todd Pletcher who is also targeting the Breeders’ Cup with the outstanding filly.

“We sent her to Todd Pletcher and we are pointing towards the Queen Elizabeth, a nine furlong 500,000 Grade One,” Team Valor’s Barry Irwin said.

“It would be, for an American filly, the best three-year-old fillies’ race on the grass we have to offer.”

Charlie Boy should feel comfortable traversing the famous ‘straight six’ having taken out the Group 2 VRC Danehill Stakes (1200m) on the corresponding day 12 months prior.

The reigning ATC Sires’ Produce Stakes winner is being aimed at the remainder of the Princess Series in Sydney before a possible tilt at the Group 1 One Thousand Guineas at Caulfield in October.