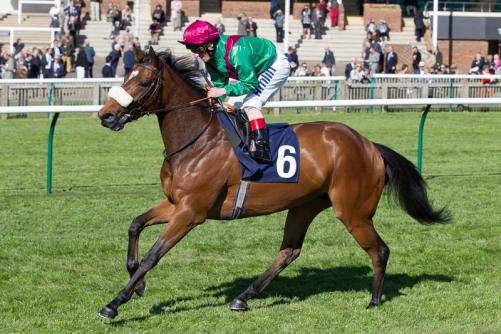 Euro Charline in the U.K.

Vinery welcomed back Myboycharlie and its shuttle stallions from quarantine on Wednesday afternoon as his first crop filly Euro Charline (GB) aims to create history in the $750,000 Beverly D Stakes.

More Than Ready, Myboycharlie, Congrats and Big Brown have returned to the Hunter Valley in readiness for the southern breeding season that commences in a couple of weeks.

Myboycharlie (Ire) will be popular this spring. His first Group 1 winner arrived in Australia while he covered his latest northern book at Haras du Mezeray in France – Peggy Jean made the breakthrough in the ATC Sires’ Produce Stakes at Randwick in March.

Trainer Gerald Ryan will target more Group 1 success with Peggy Jean in the Flight Stakes (1600m) at Randwick on October 4 and the Thousand Guineas (1600m) at Caulfield on October 11.

“The progeny of Myboycharlie have been great to us,” Chris Ward of Triple Crown Syndications commented following Peggy Jeans return to work, “We have only purchased a few of them and we have had a Group 1 winner in Peggy Jean and a Group 2 winner win Charlie Boy. Myboycharlie can produce quality types and they have proven to run and win at the highest level.”

Peggy Jean is being kept safe at $8 in pre-post markets for the Melbourne classic.

Myboycharlie filly Euro Charline (GB) can grab another Group 1 for her sire as early as this Saturday when she takes on older mares in the $750,000 Beverley D. Stakes at Arlington.

No 3yo filly has ever won the Beverly D Stakes and Euro Charline is the only filly entered against the older mares.

Euro Charline was Group 1 placed in the Coronation Stakes at Royal Ascot in June prior to a facile victory in the LR Valiant Stakes back at Ascot on July 25.

Team Valor shipped her to North America where she will tackle one of the best fields of fillies and mares assembled for the Beverley D. Stakes in recent years.