Exceedingly Good – TDN take a look at Exceed And Excel 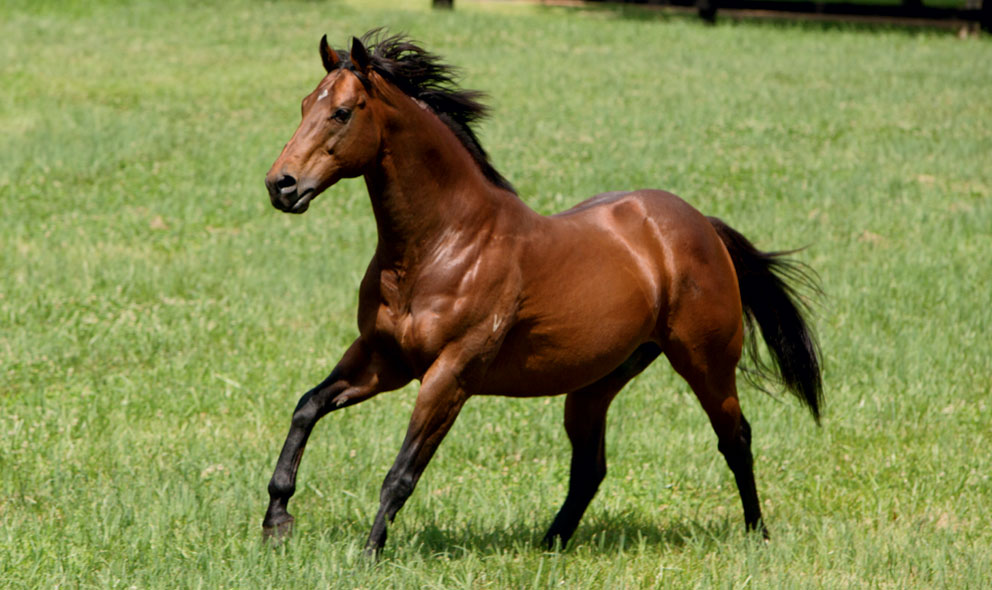 Exceed And Excel is perhaps the modern-day standard bearer for what a dual hemisphere stallion can achieve. With recognition in Australia and Europe, he is setting himself on course to achievements comparable to that of his own great sire, Danehill (USA).

Exceed And Excel is everything an Australian sire should be. He’s uniquely suited to the rhythms and demands of Australian racing in that he produces fast, early and classy 2-year-olds that progress to the top at the business end of the juvenile season and then train on to make excellent 3-year-olds.

Since the 2007/08 season, when his first runners arrived on the track, no sire anywhere in the world has matched his volume of juvenile stakes horses (149) or stakes winners (72) and there is only one Australian stallion that has ever sired more 2-year-old Group winners, and that’s his own great sire Danehill (USA).

With 38 juvenile Group winners already in the bag, it won’t be a surprise to see Exceed And Excel overtake the two sires above him on the worldwide leaderboard – Mr Prospector (USA) (43) and Scat Daddy (USA) (41) – in the coming years to sit behind the world superstars Danehill and Galileo (Ire).

And the reason that statement can be made with confidence is that the Godolphin stallion is producing some of his best work of late at the advanced age of 19. Buyers have clearly taken note too, confidently splashing out on some excellent future prospects at the recent Magic Millions Gold Coast Sale, including three for over $1 million.

Given his prowess for producing the very best of youngsters, it’s no surprise that Exceed And Excel has an envious record in Australia’s big four juvenile races. His stock have won three runnings of the G1 Sires’ Produce and three of the G1 Blue Diamond, plus two renewals of the G1 Champagne. His daughter Overreach won the G1 Golden Slipper and he had three other horses fill second place in Australia’s greatest contest for 2-year-olds.

But it’s his 2016 crop that has made the racing and breeding world sit up and realise that this stallion is capable of his very best at just about any time in his life. His three individual Australian Group 1 winners born in 2016 – not matched by any other sire – are the most he’s had from any of his previous 11 crops. And with the likes of Champion 2-year-old Microphone among them, the yearling buyers at Magic Millions were always going to be on high alert.

If there were ever more proof needed that Exceed And Excel was as potent as ever, just look at the list of his leading Australian-conceived runners. His three most recent Group 1 winners are among his six lifetime’s best horses. Exceedance, winner of the G1 Coolmore Stud S. from G1 Golden Rose hero Bivouac, is rated 125 by Timeform, which puts him behind only multiple Group 1 winner Helmet (127) and Hong Kong star Mr Stunning (126) among Exceed And Excel’s Southern Hemisphere stock on ratings.

And Bivouac is only a pound behind on 124, with Microphone on a mark of 121. Both Exceedance and Bivouac are tied for best and second-best 3-year-olds in Australia this season according to the Timeform ratings.

Exceed And Excel was champion sire in 2012/13, the season his daughter Overreach won the G1 Golden Slipper. He also led the 2-year-old rankings that season and again two seasons later in 2014/15. But the strongest evidence of his potency can be found in his core numbers. He has sired 9.3 per cent stakes winners to runners, which is an excellent score given he’s been around for such a long time.

More importantly, that number is higher than the 8.3 per cent produced from his mares by other sires. This is no mean feat given that Exceed And Excel has always had access to many of Godolphin’s own elite broodmares. Moreover, it’s also a commendable achievement given that he’s had virtually no access to many of the nation’s best broodmares, those that carry his own sire’s blood.

When he has had runners inbred to Danehill, there have been major success stories, including Group 1 winners Guelph and Bivouac. The fact that Exceed And Excel is primarily a speed influence is backed up by the 1200 metre average winning distance of his mature stock, compared to the 1400 metre of his mares’ other foals.

Support from both hemispheres

Perhaps the biggest compliment that can be paid to Exceed And Excel is the fact that commercial breeders in both hemispheres have consistently supported him throughout his long career. In Europe he’s sired 71 stakes winners at a rate of 7 per cent to runners which is an excellent score for a speed sire given the intense competition among that cohort in Britain and Ireland.

He’s also making a name for himself as a sire of sires, with eight sons already responsible for stakes winners, and as a sire of broodmares, his daughters having already produced top-class runners as diverse in aptitude as G1-winning juvenile and sprinter Ten Sovereigns (Ire) and G1 Epsom Derby hero Anthony Van Dyck (Ire).

It is fair to say that there has been no other sire since the days of Danehill that has had comparable recognition in Australia and Europe. He is perhaps the modern-day standard bearer for what a dual hemisphere stallion can achieve.

All of the above puts Exceed And Excel’s achievements in perspective and shows that he remains at the peak of his powers aged 19.

This is why we are so stoked to have secured a beautiful-moving son of Exceed And Excel at the recent Magic Millions Gold Coast Yearling Sale. He has the pedigree to match his looks, as he is out of the Group 1 performed mare My Chicharita – who is already 2/2 at stud.

Shares are now available in this athletic colt, so register your interest here or call the office on (+61 2) 9499 5212 to ensure you don’t miss out on a genuine stallion prospect of the future. 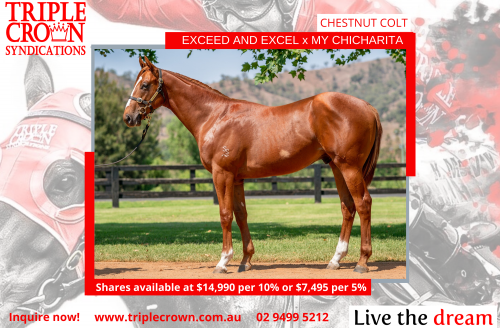