Runner-up was the mare Resistencia – the 2019 Champion 2YO Filly and a dual Group winner this year. Another 3YO, Mikki Isle’s multiple Group-winning daughter Meikei Yell was fourth, and the race favourite, last-start Group 1 winner Danon Smash, was sixth.

Congratulations to the champ MAURICE on his first G1 winner! #JRA#speeeed

Bred by Katsumi Yoshida’s Northern Racing & carrying the colours of Silk Racing, Pixie Knight won his 2YO debut in September 2020, and this year won a Group 3 mile before reverting to sprint distances. His jockey Yuichi Fukunaga indicated there is still plenty of development to come with the good-looking colt.
“He’s still not physically balanced yet but he will improve, mature and definitely become a target to beat in numerous future sprint races in or outside the country,” he said. The Group 1 Hong Kong Sprint – won last year by Danon Smash and previously by Lord Kanaloa – is an obvious target.
Pixie Knight is the second winner out of Pixie Hollow, a winning daughter of Dancing Brave’s son King Halo, and descended from the US Grade 1 winner A Kiss For Luck.
Maurice leads Japan’s 2nd Season Sires’ list with ¥1.1 billion (~A$14.3 million) and three Group winners this year.
In Australia, the six-time Group 1 winner compiled six 2YO stakes performers in 2020/21 (including Triple Crown’s MAZU) and has notched up 10 first-crop 3YO winners so far this Spring.
That latter group includes Triple Crown’s very own SAIKO, who got off the mark at Muswellbrook earlier this week, while the third and final son of Maurice purchased by Chris and Michael Ward during last year’s sales season, DAICHI, broke his maiden at just the second time of asking as a 2YO earlier this year. 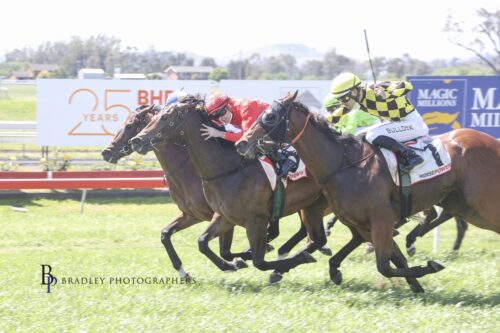 Exciting times ahead for our owners in all three sons of Maurice!
← Snitzel four-year-old too slick in Moir
Big Bad Bruce wins again at Doomben! →
Tweets by @TripleCrownSynd