French Charlie To Group One 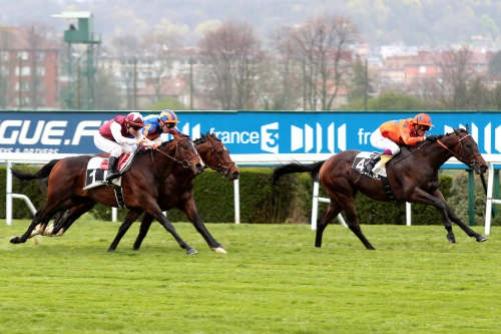 Vinery sire Myboycharlie has another Group 1 on the radar after Salaistarted his classic season in style at Saint-Cloud on Tuesday.

Salai (3c Myboycharlie – Mabadi by Sahm) won first-up after a winter spell in the Listed Prix Omnium (1600m) for trainer Jean-Claude Rouget and jockey Christophe Soumillon. He swept to a clear advantage in the straight and then held on to defeat the Andre Fabre trained stablemates Army Bulletin (Invincible Spirit) and Secret Admirer (Thewayyouare).

It was his first time around a left-handed course. “He will be set for the Poule d’Essai des Poulains (2000 Guineas),” Rouget said. “He likes to be kept fresh but we may give him another lead-up in the Prix de Fontainebleau next month.”

The Prix Omnium has been a good guide to the G1 French 2000 Guineas in May with Silver Frost (2009) and American Post (2004) both completing the double. Another target mentioned by Rouget is the G1 Prix Jean Prat at Chantilly on Bastille Day, July 14.

Salai was the first northern hemisphere winner for Myboycharlie when he saluted in the Prix De Lannemezan (1100m) at Tarbes in May last year. The first black-type arrived with a last-to-first victory in the LR Prix la Cauviniere(1600m) at Craon in September and he rounded off the year with a close third in the G3 Prix de Conde at Longchamp in October.

Australian owned SF Bloodstock bred Salai from Mabadi (USA), a three year-old winner at Chester in July 2006 before moving to California where she was Group 2 placed at Santa Anita.

Rouget was acting on behalf of part-owners Hervé Morin and American stockbroker Martin Swartz when he paid 55,000 euros for the bay colt at the 2012 Arqana October yearling sale.

Myboycharlie’s Australian filly Peggy Jean is also on a Group 1 mission at The Championships next month. She returns to action in the G2 Magic Night Stakes at Rosehill this Saturday after winning the $250,000 Inglis 2YO Classic (1200m) at Randwick in January.

Peggy Jean (2f Myboycharlie – Lady Of Love by Lago Delight) is trained by Gerald Ryan and her autumn goal is the G1 ATC Sires’ Produce Stakes at Randwick on April 12.