The Group 3 $150,000 Kevin Heffernan Stakes (1300m) at Sandown on Saturday is the right grade for Charlie Boy according to trainer Gerald Ryan. 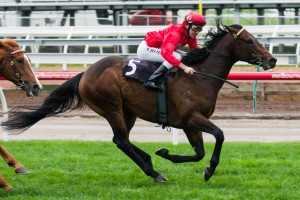 Charlie Boy will be suited dropping back to the Group 3 Kevin Heffernan Stakes.
(Photo by Race Horse Photos Australia)

Charlie Boy is dropping back from Group 2 company after finishing just behind the placegetters when fourth to emerging sprinting star Deep Field in the Group 2 $300,000 tab.com.au Stakes (1200m) at Flemington on November 1.

Ryan was happy with the run up the Flemington straight and expects the Myboycharlie four year old to be in the finish in the Kevin Heffernan Stakes.

“He’s about at this level, his past three runs have been good and he’s done well since his Flemington run,” Ryan told Racing Network.

“I reckon if that horse from Mornington (Bel Sprinter) had not been on his outside he would have got outside Driefontein’s heels and I reckon he runs a clear third.”

“He came through the Flemington race in good order and after looking at the race again, I wasn’t too disappointed.”

Charlie Boy was held up momentarily at the 600m before getting clear and finishing of the race nicely with Tommy Berry.

Michael Rodd will be taking over from Berry and has had success on Charlie Boy in the past with a win in the Group 2 $220,000 Danehill Stakes (1200m) at Flemington during last year’s Melbourne Spring Carnival.

“Michael Rodd rides him and I think the horse will do well at weight-for-age,” Ryan told AAP.

Three starts back Charlie Boy led before getting run down by Famous Seamus in the Group 2 $200,000 Bloodstock.com.au Premiere Stakes (1200m) at Randwick on October 4 and then finished third in a 1400m Handicap at Randwick the following week.

Charlie Boy is one of five runners under double figure odds in the Kevin Heffernan Stakes and is marked at $5.50 at Ladbrokes.com.au behind the $4 favourite Generlife and Fast ‘N’ Rocking at $5.

The Anthony Freedman trained Reparations is also a $5.50 chance ahead of the Flamberge ($7.50) from the Peter Moody stable.

The John O’Shea trained Generalife is also overdue for a win after being placed at his two recent Melbourne starts.