Hot Snitzel impressed onlookers with a strong piece of work yesterday and according to trainer Gerald Ryan is going into the 2014 Doomben 10,000 this weekend in excellent condition. 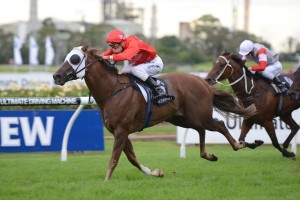 Ryan told Racing Ahead that Hot Snitzel has taken no harm out of his run in the BTC Cup and said that he has been impressed with the trackwork and condition of the Snitzel gelding heading into the Doomben 10,000 on Saturday.

“He is a bit of a funny horse because every time we go away his first run is not the best and he seems to kick on from there.

“He seems bright and well, he did a little bit of work yesterday and worked quiet well with a mate and he has been to the beach a couple of times since.

“He is a horse that to run time you have to make him run time and he finished off his work really well for him.”

Hot Snitzel will be having his sixth start at Group 1 level in the Doomben 10,000 this weekend, but Ryan admits that he is still unsure whether the five-year-old is good enough to record a race win at the highest level of racing and said that he was unable to take a guide out of his performance in the BTC Cup just under a fortnight ago.

“He seems well going into it, but whether he is quiet up to weight-for-age Group 1, he is probably a little bit below the class,”

“It was hard to get a real guide on him the other day, he over raced and pulled and hung as he can do, but he is fit and well going into it.

“He didn’t know that he had a run and I don’t think that he gave a 110%; when he stopped over racing and pulling he gave up trying.”