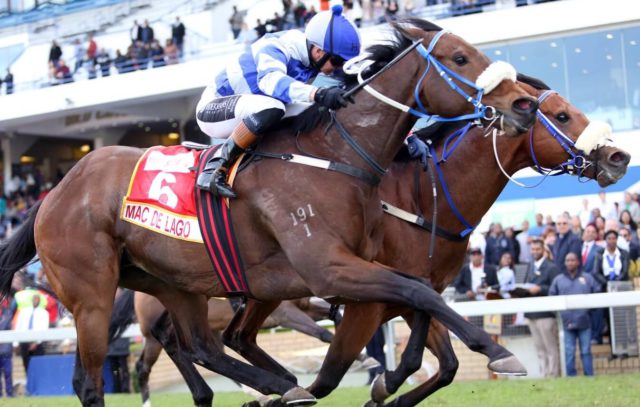 “Heads up, heads down, there’s nothing in it” roared the caller at Greyville yesterday as Mac De Lago and Trip to Heaven literally fought out the finish of the Group 1 WFA Rising Sun Gold Challenge over 1600m. The eventual winner was Australian bred Mac de Lago after a stewards protest was upheld.

It was the biggest win of Mac de Lago (Encosta de Lago x Macavelli Miss) career, with his last 11 starts being in group company and this his first black type win. He was bought at the 2013 Inglis Melbourne Premier Yearling sale by James Bester as agent for Hassen Adams.

After the win, jockey Weichong Marwing said “I thought the outcome was clear cut, this was a great prep for the July and I think Mac de Lago will spark from here.”

Offered at Melbourne Premier as lot 214, he was part of the inaugural Blue Riband session, which is a section of the catalogue for horses whose pedigree and conformation suggests they are likely to excel at 1600m and further. Inglis congratulates all connections as he heads to the Durban July, South Africa’s biggest race over 2200m on the first Saturday in July.

Note: Another outstanding Encosta De Lago colt, which was also sourced out of the Inglis Premier sale, is the Encosta De Lago x Raging Inferno colt which Triple Crown currently have shares available in. He is a real exciting stallion prospect. If you would like to register your interest in this colt please contact Chris or Michael Ward today on info@triplecrown.com.au or 02 9499 5212.