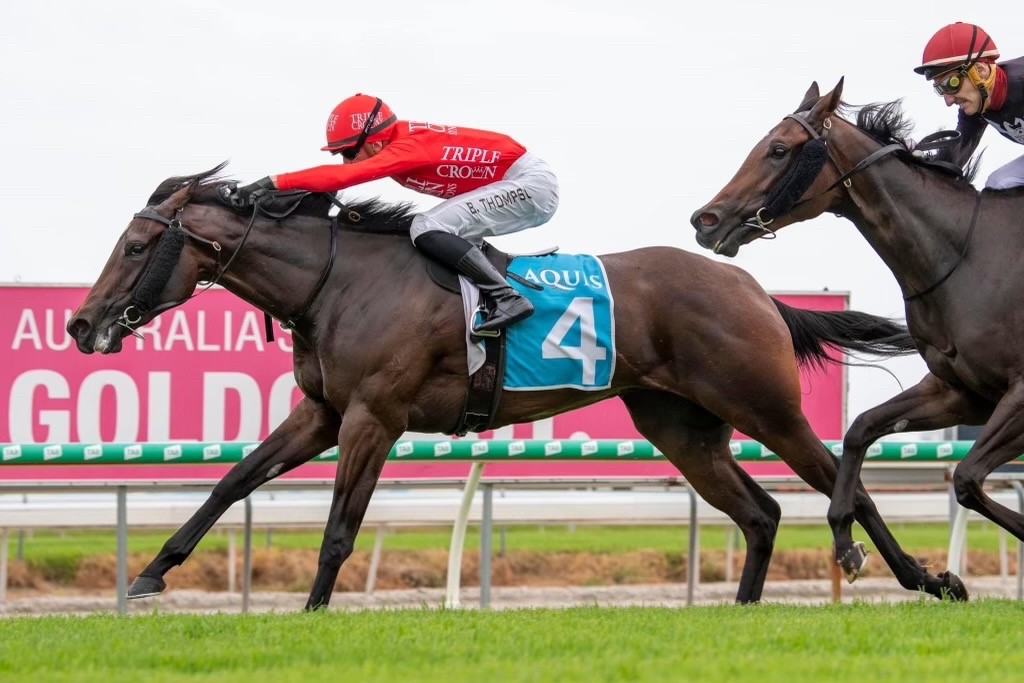 Hellbent (I Am Invincible) chalked up his first winner yesterday and the filly who provided the Yarraman Park-based stallion with his maiden victory, MISS HELLFIRE, will be aiming to hand the young sire immediate stakes success when she backs up in next weekend’s Magic Millions 2YO Classic (RL, 1200m).

Co-trainer Paul Snowden immediately outlined the plan for the talented Miss Hellfire after she won the Aquis Gold Pearl (1100m) almost one second faster than Mishani Spartan (Husson) ran in the previous race to take out the Gold Nugget (1100m) and also clinch a start in Saturday’s $2 million juvenile feature.

The Hellbent filly, who was runner-up in the Magic Millions Wyong 2YO Classic (RL, 1100m) last month, is the second stakes-performed two-year-old by the Yarraman Park-based first season sire with Bohemian Daisy the first after she ran third in the Ottawa Stakes (Gr 3, 1000m) at Flemington in November.

Miss Hellfire will now join her unbeaten stablemate Russian Conquest (Russian Revolution), a dominant winner at Randwick on Boxing Day, in the Magic Millions 2YO Classic on the Gold Coast next Saturday.

“The favourite (Coolangatta) is certainly beatable and it will also come down to barrier draws as well and the makeup of the race,” Paul Snowden said.

“We have now got two really nice fillies qualified for the race. Miss Hellfire has got the attitude, the toughness and the way she travelled up she was a little bit above herself.

“So there are some good signs for me telling me that she is going to back up well next week and that’s why we targeted this race today.

“I’m really keen to back her up next week, she has got more left in the tank, that is for sure.”

The Triple Crown Syndications-owned Miss Hellfire ($4.80), who was ridden by Ben Thompson, had three quarters of a length to spare over Perfect Mission (The Mission) ($4.60) with Stroll (Snitzel) ($5.50) another one and three-quarter lengths away in third.

She stopped the clock at 1:05 seconds flat for the 1100 metres on a Soft 7 track, 0.99 seconds faster than Mishani Spartan ran in the previous race.

Yarraman Park’s Harry Mitchell was delighted that Miss Hellfire had delivered a first victory for 2018 William Reid Stakes (Gr 1, 1200m) winner Hellbent at a time when the major domestic and international thoroughbred industry players’ focus turns to the Gold Coast.

“We have heard good talk about the Hellbents from numerous trainers in the last few months. We’ve had six or seven trial winners and a couple of horses are stakes-placed, but you always want to get the monkey off your back with a winner and I think that filly ran real guts and determination and she ran a very good time,” Mitchell said.

“She was bred by Newgate and I appreciate their support as a shareholder (in Hellbent) and so I am really excited by the win.”

Miss Hellfire is the latest example of what is proving to be Newgate Farm’s potent investment in American mares to be brought to Australia to be bred to either their own or outside colonial stallions.

The Snowden-trained filly, bred by Newgate Farm partner S F Bloodstock, was bought for $60,000 by Triple Crown Syndications at last year’s Magic Millions sale and from her two starts so far has already won almost $110,000 with the prospect of more to come, possibly as soon as Saturday.

“It is a great result for Triple Crown, who buy a lot of horses every year, and it’s a great result for the Snowdens who also have another Newgate graduate in Russian Conquest short in the betting for Saturday’s Magic Millions race,” Newgate Farm stud manager Jim Carey said yesterday.

“I think she is our eighth two-year-old winner off the farm this season already and it carries on from obviously last year with Stay Inside and all the other good horses we bred on the farm, so it ensures we’ve got momentum going into the Magic Millions sale.”

Their dam Peace Time (War Front), herself a daughter of US Grade 2 winner Santa Catarina (Unbridled), was one of S F Bloodstock’s Keeneland November Breeding Stock Sale purchases to end up Down Under at Newgate Farm. S F Bloodstock paid US$260,000 for Peace Time at the 2016 sale.

She has a More Than Ready (Southern Halo) yearling filly who will be offered at the Inglis Australian Easter Yearling Sale in April.