At age 21, this memorable Cox Plate winner is a mum again this spring. 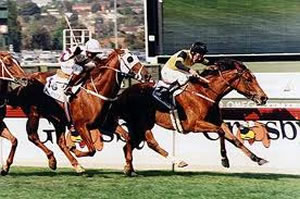 Brilliant mare Dane Ripper shot to fame as a three year-old filly when winning the Group I QTC Stradbroke Handicap for Bart Cummings with just 50kg on her back.

A homebred for Gae Codner, who had bred and raced her mother Red Express to win the Group I STC Orlando Classic (now the Coolmore Classic), Dane Ripper was then set for the spring carnival of 1997, but nothing went to plan.

The daughter of Danehill (USA) failed to win in three starts in Sydney culminating in an 11th placing in the Epsom, so was dispatched to Melbourne more in hope than expectation.

Partnered by Damien Oliver and sent to the post at odds of $41 for the Cox Plate, Dane Ripper found her mojo to zoom clear and beat outstanding galloper Filante by a length and a half.

She later proved the win was no fluke, adding Group I victories to her resume in the VRC Australian Cup and MVRC Manikato Stakes.

Dane Ripper was retired to stud in 1998 and has spent virtually her whole life at Coolmore.

She remained in the ownership of the Codner family until last year when she was sold through the Inglis Broodmare Sale fetching $50,000 and is now owned by a Coolmore syndicate. 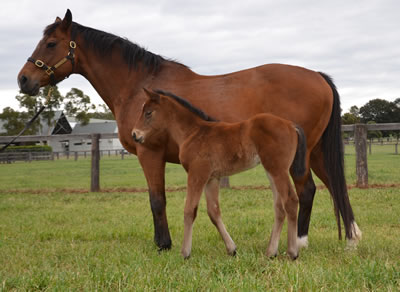 At stud, Dane Ripper has had six foals to race, three of them winners headed by stakes-placed Switchblade and Star Ripper.

In the pipeline to come are a three year-old High Chaparral (IRE) filly calledDiamond Fever and an unnamed two year old colt by the same sire.

After missing in 2012, Dane Ripper was sent to Golden Slipper winnerPierro, with this lovely filly the result of the mating.

“She is a very nice filly, easily the best foal she’s had since I’ve been working at the farm,” said Sebastian Hutch of Coolmore.

“Pierro puts a lot of size and scope into his offspring, which has been very pleasing to see. He stands at 16.1 hands, so has grown into a good sized stallion and has produced some terrific foals from smaller mares.

“You’d have to say Dane Ripper has been a bit disappointing at stud, but the two High Chaparrals she has to come were both nice horses and it looked a really good mating for her on paper, so where there is life there is hope.”

Still in fine fettle, despite the advancing years, Dane Ripper is scheduled to visit Epsom Derby hero Camelot (IRE) as her next partner.

Dane Ripper is one of only two living female winners of the Cox Plate, the other being Australian Horse of the Year Makybe Diva.

Makybe Diva has also foaled this spring producing a filly by All Too Hard and recently tested positive to fertility troubled sire sensation Starspangledbanner.