Maurice powers up in Japan and Australia

Four new Japanese 2YO winners in two days and his second Australian trial winner made it a memorable few days for exciting first-season sire MAURICE.

The good-looking colt Maurice’s Medad followed up his trial 2nd a fortnight ago with a strong effort to score right on the line at the Official 2YO Trials in Sydney on Monday morning. He stopped the clock at 50.65 seconds for the 850-metre dash.

A Monday treble gives him 14 winners in Japan, and an Australian trial winner starts the week with a bang for Maurice with an impressive finish by his aptly named 2YO Maurice’s Medad (pictured).

Trainer Bjorn Baker said, “I wish I had more horses in the stable with the father being Maurice! He’s the shining light of my two-year-olds at present.” 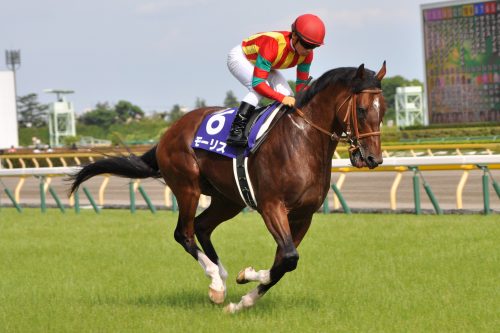 The Japanese superstar has made a great start to his stud career at home and after four wins over Japan’s long holiday weekend, Maurice has 14 individual winners and heads the First Season Sires’ Premiership.

The filly Coco Crush won a 1200-metre maiden at Chukyo on Sunday by 1.25 lengths in 1:10. On Monday Maurice stepped up the pace considerably, unveiling his 12th, 13th and 14th winners in rapid succession.

Polestar won over 1400 metres at Chukyo and he was soon followed by the Northern Farm-bred pair Zodiac Sign & Bloemendaal at Nakayama.

Another winner for first season sire MAURICE, over 2000m this time.

Maurice has three initial crops in Australia that are now 2YOs, yearlings and 2020 foals but was kept in Japan this year because of Covid-induced transport uncertainties.
Arrowfield Stud
← Moss Trip scanned in foal to Trapeze Artist
Missile Mantra ready to fire at Flemington →
Tweets by @TripleCrownSynd