Arrowfield graduate Missile Mantra put a frustrating 3YO season behind her when she powered to victory in Saturday’s $160,000 MRC Summoned S. 1500m G3.

It was the Snowden-trained mare’s third win and her first since she took out the Vale Redoute’s Choice S. LR as a late 2YO. The highlight of her 3YO campaign was a very close second to Flit in the Thousand Guineas G1.

Missile Mantra launches down the outside to take the win from Tricky Gal who was game in defeat.@SnowdenRacing1 @TripleCrownSynd pic.twitter.com/VUSCrh60Um

The daughter of Smart Missile is a wonderful success story for her ownership group and Triple Crown syndicators Chris & Michael Ward who bought her for $30,000 from Arrowfield’s 2018 Magic Millions draft.

Missile Mantra’s earnings are now close to $500,000 and her future broodmare value is substantial. 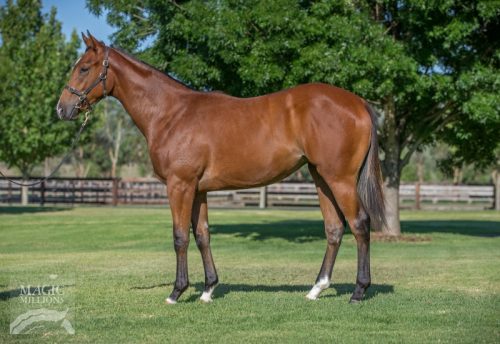 Her dam Wecansay Mak (by Starcraft), a winning sister to dual Group 1 winner We Can Say It Now, has a yearling filly by Dundeel, a Snitzel filly at foot and has been served by Castelvecchio.