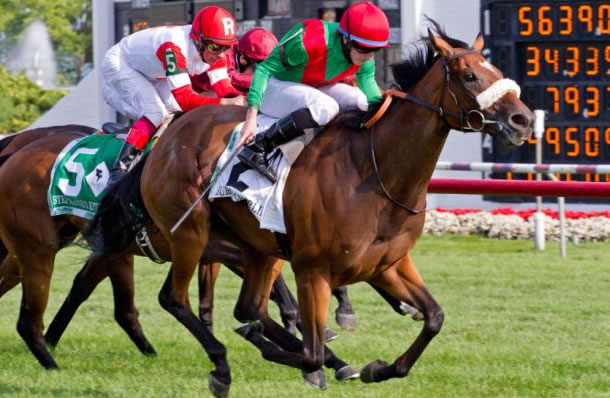 The British bred daughter of Vinery shuttler Myboycharlie opened up a commanding advantage in the straight and then held off a late charge from the favourite Stephanie’s Kitten to win by three-quarters of a length.

“She travelled real sweet,” winning jockey Ryan Moore said. “Then she kicked on nicely like a good filly would.”

Euro Charline (3f Myboycharlie – Eurolink Artemis by Common Grounds) was having her final start for trainer Marco Botti who had guided her to a Listed victory and Group 1 placing in England earlier this year.

“Marco had been bugging me for months to send her over for the Beverly D,” Team Valor owner Barry Irwin said. “I wasn’t so sure. I thought it was a little ambitious because three-year-olds don’t normally do well in this race.”

Indeed, Euro Charline became the first 3-year-old to win the Beverly D., which in the past three years has produced two Eclipse Award champion turf females.

First run in 1987, the Beverly D. has produced 6 winners who have gone on to be champions of their division – Dank, Stacelita, Golden Apples, Possibly Perfect, Hatoof, and Flawlessly.

The year’s edition comprised the best field of fillies and mares assembled in North America this year with no less than five Group 1 winners engaged.

Vinery welcomed Myboycharlie back to the Hunter Valley from quarantine on Wednesday. His first Group 1 arrived in April when Peggy Jean claimed the ATC Sires’ Produce Stakes Gr.1 at Randwick.