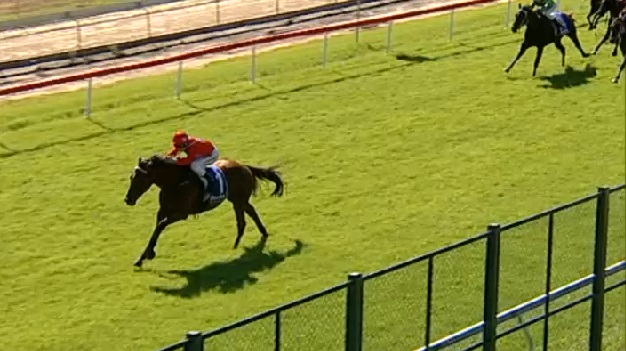 Taking out the 1400m maiden event, Rock Mylady was sent out the $1.90 favourite, however a couple of minor issues had owners, and punters alike, sweating before the starter released them from the gates.  Knocking his head in the tie up stalls before tipping jockey Josh Parr off in the mounting yard were put down to immaturity from a horse still learning his craft by trainer Peter Snowden, who is expecting further improvement from the 3YO gelding.

As soon as the gates opened Rock Mylady was quick to put those issues behind him and was travelling sweetly at the back of the field before straightening quickly on the home turn where looked to have the race in his keeping.

“He’s still learning and went past them going at ¾ pace” Parr commented, on a day when front runners dominated the winners stall.

From the Sledmere Stud draft at the Inglis Classic Yearling Sale in 2013, Rock Mylady was a $50,000 purchase by Triple Crown’s Chris and Michael Ward. This sale was also the source of the syndication company’s Group 1 Sires’ Produce winner Peggy Jean, and is where they are looking forward to getting back to next week when the annual sale takes place.

“He’s a horse we believe will get over classic distances in the future, so to see him win running away over 1400m today was very encouraging”

“It’s a great win for a good group of our owners and a fantastic start to our exclusive partnership with Peter and Paul Snowden” Chris Ward.

← Exhibition gallop for Shooting To Win
3 winners from 3 runners in 3 days! →
Tweets by @TripleCrownSynd