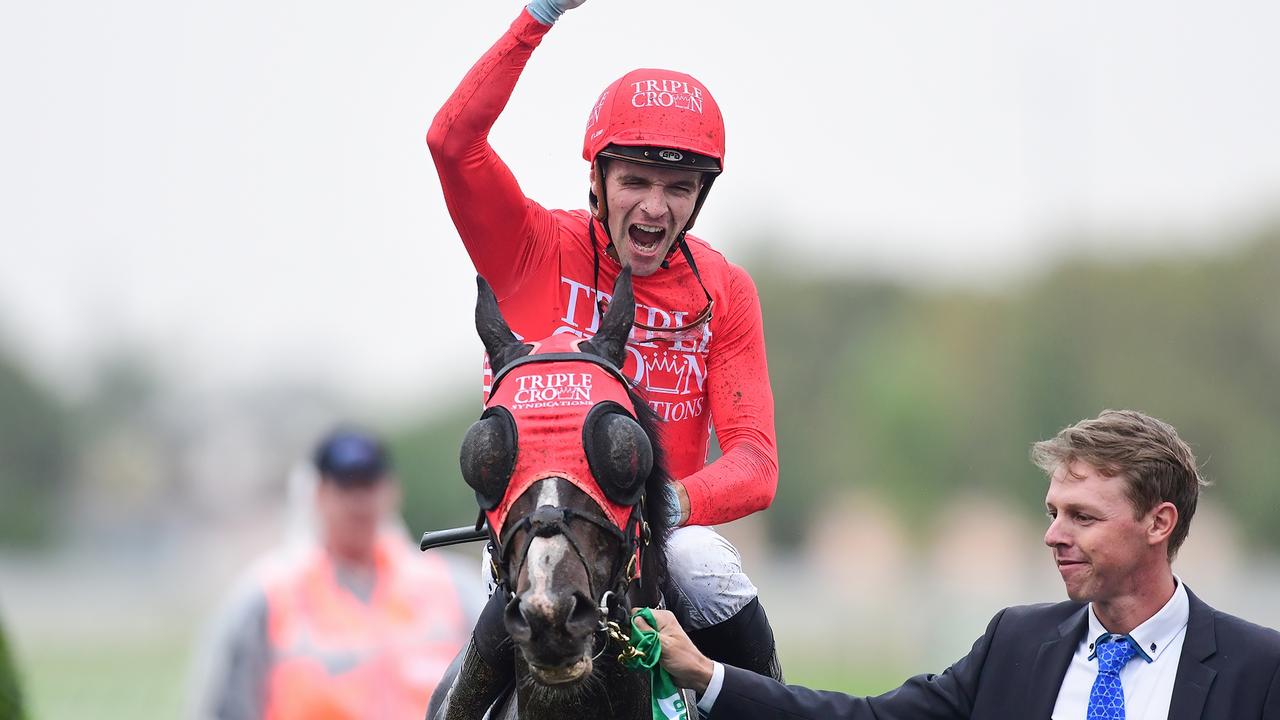 An emotional Paul Snowden wiped away tears as he reflected on Mazu’s extraordinary journey from hot-headed youngster to exhilarating Group 1 star in a memorable Doomben 10,000 triumph.

Three-year-old Mazu, a winning machine, was walking in the hoofprints of Snowden legend Redzel who landed his first Group 1 in the Doomben 10,000 in 2017 before going on to great things including two mighty wins in The Everest.

Mazu, wearing the same Triple Crown colours, could be cut from the same cloth but he wasn’t a boy wonder in his early days and Snowden and his father Peter have had to work overtime.

A gelding procedure set Mazu on the path to stardom, claiming his first Group 1 as he clung on to win the Doomben 10,000 and fend off valiant Godolphin galloper Paulele.

James McDonald (Paulele) viewed the stewards patrol footage after the race after he and Mazu (Sam Clipperton) came together in the Eagle Farm straight but he elected not to lodge a protest.

Five years after Redzel’s win in the 10,000, emotions flowed freely for Paul Snowden.

“This doesn’t happen a lot, to mend the ways and manners of a horse,” Snowden said.

“Today was the best he has ever been in his life.

“This was a horse who used to sweat at 4am in the morning going onto the track.

“His head was working and he was buzzing.

“He’s a different horse today and this is an incredible result.

“My emotion is also because we have been through some tough times during the Covid pandemic, everyone is going above and beyond.”

Mazu drifted from $2.40 to $3.30 in betting but the result was a bonanza for plenty of punters who backed him and also The Everest slot-holders who have signed him up for the $15m race for the next two years.

It marks a return to the Group 1 winners’ circle for Clipperton, who endured 14 second placings at the top level since 2016.

The former rising star of Australian racing stepped away from the sport two years ago after returning from Hong Kong, saying he needed a sabbatical to clear his mind.

Clipperton travelled with family and eventually returned to racing following a surfing trip to the Philippines.

After becoming a father last year, Clipperton was dealt a hammer blow in the spring last year when he suffered a broken jaw following a kick to the face by a horse.

The Doomben 10,000 victory puts the icing on top of what has been a sensational 2022 for the hoop, where he has again established himself as a leading rider.

“I’m coming to Brisbane to ride a Group 1 favourite and they (connections) could have got anybody and they stuck with me,” Clipperton said.

“I was thinking at the 600 (metre mark), we’re in strife. He was chasing a hot speed and was out of his comfort zone.

“He really wasn’t sure on the surface.

“It is a different heavy track, as well documented, but I just tried to pick him up as best I could and get him as far down the straight on the bridle.

“He’s just a star, this horse. He knows how to win and we’ve got a great rapport with each other.”