While flashy two year old Rubick stole the show at the Rosehill barrier trials today, trainer Gerald Ryan will be concentrating on another one of his juveniles when Peggy Jean lines up at the Kensington track at Randwick tomorrow. 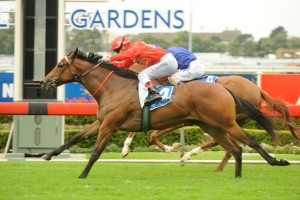 Ryan will be hoping that first starter Peggy Jean can pick up some of the $40,000 prizemoney that is on offer in the ATC Membership On Sale Now Plate over 1000m to help her gain a start in the $250,000 2yo Inglis Classic(1200m) at Randwick on January 18.

Peggy Jean is going into tomorrow’s race on the back of one official barrier trial when she finished fourth to Starzel over 734m at Randwick on December 24 and Ryan is expecting a forward showing rom the Myboycharlie filly.

“She is lovely filly who will probably appreciate more ground but she needs to earn some prize money to get into the Inglis Classic,” Ryan said.

“I was pleased with her barrier trial. She does everything right and from barrier one she should get a good run in the race.”

Peggy Jean will be up against three other fillies that came out of last year’s Inglis Classic Sale who are also trying to earn valuable prizemoney heading towards the Inglis Classic on Saturday week.

The top Sydney trainer had been on the Gold Coast inspecting yearlings in the lead up to the annual Magic Millions Sale this weekend but returned in time to see the smart Rubick win his 900m Rosehill trial by seven and a quarter lengths.

Ryan has earmarked the Encosta De Lago colt for the Group 1 $1m Sportingbet Blue Diamond Stakes (1200m) at Caulfield on February 22 and will kick off his autumn campaign at Randwick on January 25.

“He just lobbed along and cruised up and accelerated in the straight and it was very pleasing to see him take what I had seen him do on the track to the trial,” Ryan AAP.

Rubick is prominent in Blue Diamond betting and after today’s first public showing has been marked a $9 chance behind the Peter Snowden trained Earthquake at $4 and Chivalry and Risen From Doubt both at $7.