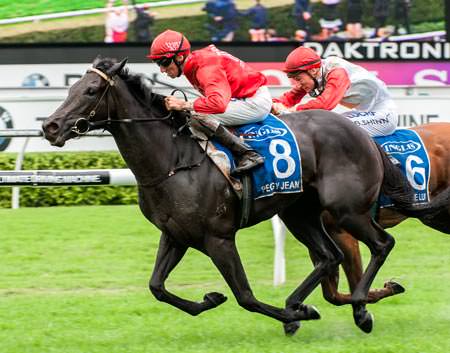 PEGGY JEAN made history in The Red silks of Triple Crown when winning the 2014 Group 1 Sires Produce Stakes at Royal Randwick during the very first year of The Championships, in doing so she became the first Group 1 winner for Triple Crown Syndications.

A very special filly to all of us here, Peggy Jean was purchased for $45,000 from the Inglis Classic Sale, winning the Inglis Classic a year later and going on to win $920,000 in prizemoney, before being sold as a broodmare for $1 Million after her racing retirement.

On Wednesday, the Triple Crown team went to inspect her outstanding daughter by I Am Invincible, who is set to be sold at the upcoming Inglis Easter Sale as Lot 284 from the Widden draft.

The boys from @TripleCrownSynd inspecting the gorgeous I Am Invincible daughter of their Group 1 winning 2yo Peggy Jean @inglis_sales Easter. #ThatWiddenFeeling pic.twitter.com/Smt9RbmzUd