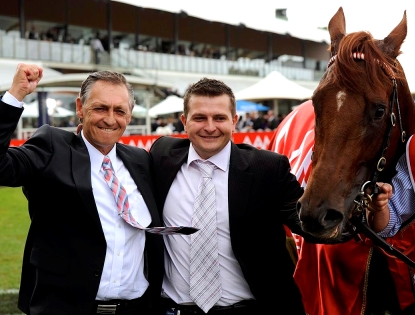 IN UNDER four years, powerful father-and-son duo Peter and Paul Snowden have taken all before them since leaving the almighty Godolphin operation, where 29 Gr.1 winners prevailed under their watch. Today, Snowden Racing has scored six elite, 53 black type and almost 300 victories in its own name while sending three stallions in Shooting to Win, Pride of Dubai and Capitalist to stud. In this edition of Movers and Shakers the popular yet understated pair open up about their world ofracehorse training and those who have inspired them.

Q: Where did your passion for horses come from Peter?

A: “From my father (Ross) who was a jockey. My mother died when I was three, so I lived with my grandparents in Moss Vale for a few years, which meant I only saw dad occasionally during that time. He remarried and we eventually set up permanently in Scone when I was 11. Dad got back in to working with horses and prepared yearlings for sales and I used to help him, so that was where my grounding started. “I’d get up at 4am to do boxes, go to school, come home, do the boxes, homework and basically fall asleep on the dinner table. I started riding work around the
age of 12.”

Q: What did it feel like the first time you galloped?

A: “Cantering was great but the first time I let one go, it was like being a cat in the dairy, I couldn’t wipe the smile off my face. It does give you a buzz, and I see that same look on riders today who are having their first gallop. I still miss riding but feel too old for it now. Good hands, patience and understanding the animal are the keys to a good rider.”

Q: The best part about your job

A: “A sense of achievement with each horse. Seeing them come in when they’ve barely been broken in, teaching them to gallop, and watching them transform into racehorses, I get enjoyment out of that. Training for a variety of owners is quite a different experience. Each owner behind each horse has a story and they’re from all walks of life. “We have doctors, lawyers, farmers, and miners.
Racing is a great leveller and I like that. Winning Gr.1 races is the ultimate, but I also get satisfaction out of seeing one win a maiden at Kembla and the look on the face of a winning owner.”

Q: What are some of the challenges facing a trainer these days?

A: “Rising owners’ costs and I believe in reducing the costs of training so all owners can benefit, not just those finishing in the winners’ circle. Clubs decreasing stable rent, and a reduction in various industry administration charges, such as trial and nonacceptance fees, are both good starting points. “As good as it is for wagering turnover, overtaxing of the industry by the sheer amount of racing is extremely demanding on stables. With night racing and higher prize money available in country areas, we’ll travel greater distances to tracks such as Scone and Nowra and with that comes a need for more staff resources. Every trainer runs their business the way they want to, but sometimes it feels like you’re chasing your tail because it’s a relentless 5-7 day racing schedule between states. On average we race our horses three to four days per week. “Finding and keep good quality stable staff, especially in Sydney where housing rents are sky high, is an ongoing issue. International travellers come and go (many move on because of work visa issues), and working hours can be tough and unsociable. It’s a niche market we operate in.”

Q: Is there enough mental health support for trainers?

A: “Pressure and stress come with horse training, it’s the nature of the job, but if you can set up a structure where you can step away and let someone manage things so you can take a day off or a decent break that’s a good thing. I’m guilty of being a bit clingy to the job because I like things to be done in a certain way, systematically and regimentally every day to avoid mistakes, but mistakes do happen, that’s just life. Being in partnership with Paul is very handy because we know each other, trust each other and have an understanding on how things should operate.”

A: “We’ve got a good team of horse experts, and workers on the ground and as far as the office goes, Colin (programing), Maree (racing secretary/PA), Jackson (racing manager), Lyn and Lisa (HR and accounts) and Sarah (website, marketing and social media) make up the team. They are all important and would be hard to replace because we’ve built a good rapport. Maree and Colin, for example, go back to the Crown Lodge-Darley days. Building an association, trust and a relationship takes time, but once you get them right it’s invaluable.”

Q: Who has inspired you?

A: “I’ve always wanted to make my dad proud. When Lyn and I married in our early 20s I said that we should go as hard as we can, so we could put our feet up at 40 and chill out . . . I just touched 60 the other month and we’re still going hard! “I don’t think I’d be the trainer I am today without Lyn. She had the drive as well and encouraged the decision to move from Scone to Sydney with a young family. At the time I trained 35 horses at Scone, we had two staff and I rode most of my own work, but it felt like an existence, not living to the extent that we wanted to. “Then Vic Thompson offered me a foreman role at Warwick Farm. We thought long and hard about it and decided to take a chance and do it. It was a decision that snowballed to working for John Hawkes as assistant trainer, where we had a lot of success with champion horses, to head trainer for the Ingham’s at Woodlands (Crown Lodge), and Darley. Often it’s about being in the right place at the right time and things happen.”

Q: Five Gr.1 wins within the first season of operation was a dream start.

A: “Absolutely, Crown Lodge and Darley were good platforms. Well-bred horses were given to us on a platter but you still need to train them to win. We had to get back out and earn our stripes under our own name. It was a freakish beginning; five Gr.1 wins in one season may not happen again for a while, but we’re always fine-tuning and working towards it, thanks to the support of a great group of owners.”

Q: Most memorable horses and one to watch for 2017?

A: “Octagonal and Lonhro were the best during the Crown Lodge era and my biggest thrill was seeing Octagonal win the (1995) Cox Plate. It was the best feeling I’d ever had on a racecourse. “Sepoy winning the (2011) Slipper for Sheikh Mohammed was special. That was a race I always wanted to win. It was my Melbourne Cup. All Gr.1 winners have meant a lot, but to win a second Slipper with Capitalist was particularly exciting. Watch for Russian Revolution in 2017, I like him as a Stradbroke prospect at this stage.”

Q: Paul where did it all start for you?

A: “As a kid I used to follow dad around the stables like a homeless dog; looking, learning and helping out. My first sense of responsibility came with four lead ponies. I looked after them morning and afternoon when I was at high school. I used to get paid $50 a week, which was good money back then! I then worked weekends and strapped on Saturday’s and built up from there to track riding and foreman over many years. I’ve been lucky to learn from the best. “Dad’s dad used to teach me to ride on holidays as a kid too. He’d set up at a makeshift pony club at home and commentate, they’re great memories.”

Q: What three changes would you make to the Australian racing industry?

A: “It’s harder to find strappers and riders who want to start work at 3.30-4am. It’s a lifestyle choice and people are becoming more sensitive to it. I think it would help if morning track work started later, if even by an hour. “State racing bodies should work closer together so we don’t have situations where big races like the Guineas clash on the same day or that different rules apply from state to state. There are too many egos and not enough compromise for the betterment of Australian racing at times. The fact you can’t watch Sydney and Melbourne racing on the one primary channel is a shame. “There’s obviously a market for night racing and I’d love to see it held at Randwick, especially with the new train and light rail lines. Hours should be condensed so the last race finishes at 9pm or just after otherwise it starts getting too taxing on participants. Free entry should be considered.”

Q: What does Christmas Day look like in the Snowden household?

A: “We work the horses in the morning and wrap things up an hour earlier by 8am. We then head to my sister Lisa’s house, open presents with the kids and have an early lunch over a couple of drinks. Dad and I are usually asleep by 1pm and then it is back to the stables in the afternoon. “We’ve lost a few close family members over the years; my Aunty Jo last year, Granny, who held
on to see me get married before passing away the following morning and the family favourite, mum’s brother Greg (Cribb) who we lost in a car accident, so it’s a day of remembering too.”

A: “Shooter (Shooting To Win) winning the Caulfield Guineas. He was our first Gr.1 horse, I talked him up beforehand and there’s no better feeling than having that belief justified. Winning the Slipper and Magic Millions with Capitalist, because he overcame setbacks that would usually derail a preparation.”

A: “Khan has a lot of raw ability and we hold high hopes for him, but there’s a long way to go yet. Invader ran fourth to him in the Breeders’ Plate but was a bit more immature and went shin sore, but still keep an eye on him. There could be one or two more who stand up, but in the world of two year-old racing, anything can happen.”

Q: How does your management style differ to Peter’s?

A: “I’m a bit more relaxed. Dad was training 40 years ago, running his own business, so knows exactly how he wants things to run. A dollar is a dollar! Some things don’t change when it comes to training horses but I bring a different perspective to the table at times. There’s a healthy line of respect.”

Q: Maddison is more than 12 months old now, how has life changed since becoming a dad?

A: “I’m just starting to get the gist of it in all honesty. It took a while for the enormity of parenthood to settle in. It’s not about Krystle and me anymore! “I’ve got a new little best mate who’s banging at the window when she hears the car pull in. It’s a great realisation and Krystle has been amazing. I’d love to have more, they’re addictive little buggers.”