Mikki Isle’s first-crop 2YO daughter Meikei Yell did it all at Hanshin on Saturday: she kept her unbeaten status with her third win, added her second Group 3 victory and set a new juvenile track record.Meikei Yell won her debut in August before taking out the Grade 3 Kokura Nisai Stakes (1200m) on 6 September. She has now added the ~A$730,000 Grade 3 Hanshin Fantasy Stakes (1400m) in the blazingly fast time of 1:20.1. (She is No. 10 in the replay with the jockey wearing an orange cap and green & white colours.)

Impressive again today despite pulling much of the way!#MikkiIslepic.twitter.com/mxWkyUjI4E 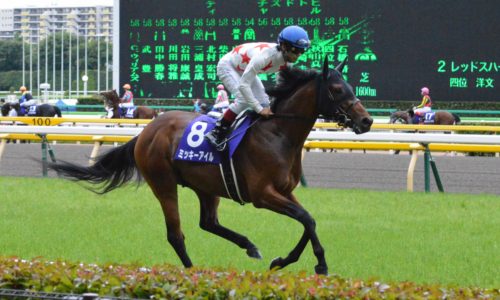 The second crop of Australian yearlings by Mikki Isle, who was Japan’s 2016 Champion Sprinter-Miler, will be offered for sale in 2021.

All of the above will have the owners of Triple Crown’s Mikki Isle filly Mishka Magic excited at the prospect of having her return to pre-training in the coming weeks!