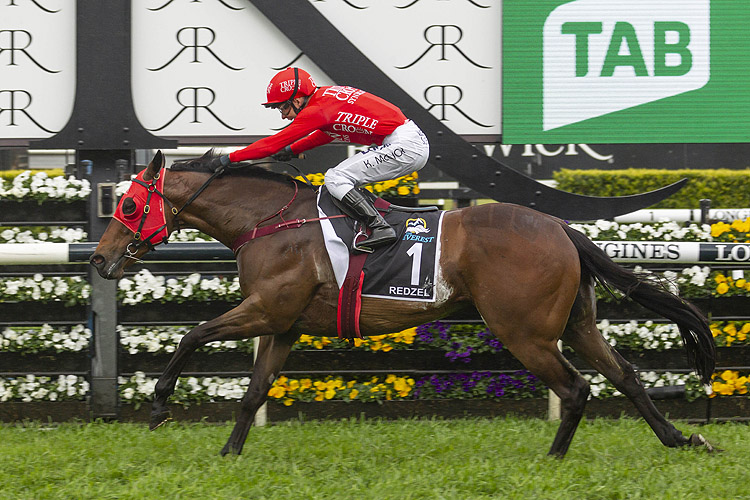 Team Snowden have poured the work into Redzel to ensure he is not found wanting on the score of fitness first-up at Randwick.

The only horse to have won the $14 million Everest, Redzel is just days away from his season return in the race that has been the launching pad for his past two wins in the rich race.

At seven, he is the elder statesman of Saturday’s Concorde Stakes field by two years, but he is also the reigning champion having won the Group Three sprint on his way to both Everest triumphs.

Still, co-trainer Paul Snowden could be forgiven if he is half looking, half expecting to see a chink in the gelding’s armour as a bunch of new young horses jostle to usurp his sprint crown.

Yet the only signs Snowden is seeing are positive.

“He’s got a glint in his eye when you walk out to him at four o’clock in the morning that suggests he’s like a dog waiting for you to throw him the ball.

“He doesn’t have to be better than what he was, he just has to be about the same and that’s good enough.”

Despite his status as one of Australia’s best sprinters, Redzel has been marked the outsider of Saturday’s six-horse field at $8.

In a race jam-packed with talent, punters are banking on Chris Waller having reformed the once-headstrong Nature Strip, who is a clear $2.30 favourite, ahead of speedy mare Sunlight at $5.

Also there is Group One All Aged Stakes winner Pierata having his first attempt at the 1000 metres, along with Graff and Queenslander Zoustyle, both relatively untapped talents out to showcase their claims to an Everest slot.

Given the quality of the field, the Snowdens have done their homework and no stone has been left unturned, especially when it comes to Redzel’s fitness levels.

“It’s going to be intense pressure there from about the half-mile onwards and he’s going to have to be very forward, which he will be,” Paul Snowden said.

“That’s no different to any other preparation. He’s a horse who races with a lot of intent so you have to have him somewhere near the mark, and he can sustain a peak throughout a preparation rather than just one or two runs.

“If he doesn’t win, we’re not going to throw the toys out of the cot because it’s such a high-pressure race.”

The Concorde Stakes will also give Kerrin Mcevoy a chance to sound out Redzel’s credentials for a third Everest tilt.

He has ridden the sprinter to victory in both runnings of the feature sprint but as the regular rider of fellow slot holder Classique Legend, McEvoy is yet to decide which horse he will partner in October.