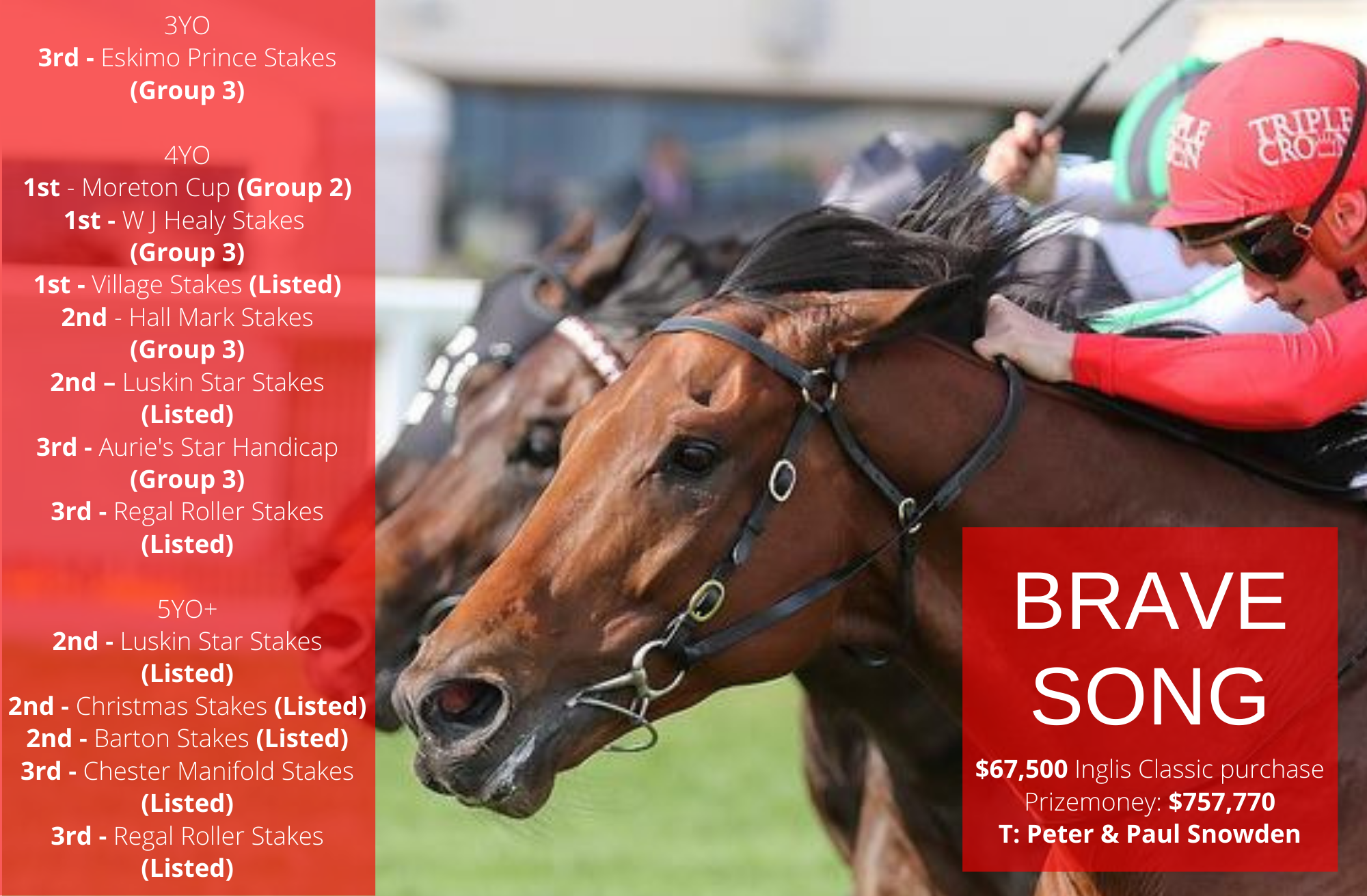 It’s a bittersweet symphony as we announce the retirement of our multiple Stakes winner BRAVE SONG, who has been one of Triple Crown’s leading lights over the past four years.

Purchased for $67,500 by Chris & Michael Ward at the Inglis Classic Sale in 2016, Brave Song went on to accrue $757,770 in prizemoney during a glittering race career, one which saw him emerge victorious at Group 2 level and compete in no less than 27 Stakes races.

It didn’t take long for Brave Song to show a glimpse of his abundant talent, with the son of Your Song exploding away to record the first of his seven metropolitan wins on only his second career start as two-year-old. After adding two more city wins to his burgeoning record, Brave Song’s first Stakes placing came the following preparation when third behind subsequent Group 1 winner Kementari and Group 1 placegetter Siege Of Quebec in the Eskimo Prince Stakes.

Brave Song scored his maiden Stakes victory in the Listed Caulfield Village Stakes, but it was the autumn of his four-year-old season when he announced himself as a sprinter of the highest quality. Having suffered two narrow defeats at the hands of another subsequent Group 1 winner in Trekking, Brave Song headed north for a successful raid of the Brisbane Winter Carnival, where he landed both the Group 2 Moreton Cup and Group 3 W J Healy Stakes in terrific style.

Off the back of his best preparation to date it was no surprise that Brave Song was listed as an emergency for The Everest the following spring, before going on to compete in the inaugural $1m The Hunter, a race he also lined up in the following year.

Brave Song continued to acquit himself well in Stakes company right up until his recent retirement, notching up three consecutive Stakes placings in his penultimate preparation. Sadly, injury prevented him from getting his beautiful head in front one final time, but Brave Song’s race career did end on a high note with a fast-finishing third in the Listed Regal Roller Stakes – The same spot he occupied in the race three years earlier.

In addition to 27 Stakes races, Brave Song also competed in a trio of million dollar races that have yet to be awarded Stakes status, leaving no doubt that he provided his owners with some terrific memories during his stellar race career.

We would like to say a special thank you to his brilliant owners – A terrific, enthusiastic group of people who made racing this beautiful bay even more enjoyable – as well as to all the teams at Snowden Racing and Muskoka Farm, who looked after him so well during his racing career.

We are absolutely delighted to confirm that Brave Song will be going back to where it all began and returning to Yarraman Park Stud, where he spent his formative years prior to joining the Triple Crown team.

Harry Mitchell, Yarraman’s co-principal, has said that they intend to try and retrain Brave Song as an eventer once he has enjoyed some well-earned downtime in the farm’s luscious green paddocks. All being well, Brave Song could then partner up with Harry’s daughter Willa, who is a supremely talented eventing rider with Olympic aspirations.

As with all Triple Crown horses, we are delighted to have secured Brave Song a good home to enjoy his post-racing life and we look forward to following his future endeavours with keen interest.