Top Sydney trainer Gerald Ryan is hoping that Charlie Boy’s new rider Michael Rodd can bring him a change of luck in the Group 3 $150,000 Kevin Heffernan Stakes (1300m) at Sandown on Saturday. 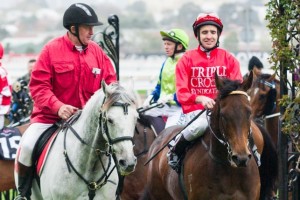 Michael Rodd will be back aboard Charlie Boy in the Kevin Heffernan Stakes. Above Rodd returning to the winner’s stall on Charlie Boy after winning the Danehill Stakes.
Photo by Race Horse Photos Australia.

Ryan has finished second in the Kevin Heffernan Stakes the last two years with his smart sprinter Hot Snitzel and is looking to go one better this year with Charlie Boy who is one of fifteen horses nominated for the weight for age race.

“Michael Rodd rides him and I think the horse will do well at weight-for-age,” Ryan told AAP.

“I’ve run second in this race for the past two years with Hot Snitzel and run into a good one each time.”

“The first year it was the Stradbroke winner Mid Summer Music and last year Lankan Rupee won it.

“I’d like to win it this time with Charlie Boy.

“He came through the Flemington race in good order and after looking at the race again, I wasn’t too disappointed.”

Rodd is no stranger to Charlie Boy and was aboard the Myboycharlie entire in his three year old season and managed to win the Group 2 $220,000 Danehill Stakes (1200m) at Flemington during last year’s Melbourne Spring Carnival.

Charlie Boy’s Spring form has been okay and he was narrowly beaten three starts back by Group 1 winner Famous Seamus in the Group 2 $200,000 Bloodstock.com.au Premiere Stakes (1200m) at Randwick on October 4.

The John O’Shea trained Generalife is also nominated for the Kevin Heffernan Stakes and has been racing consistently this Spring and is not far off a win.

The Lonhro gelding finished just behind Charlie Boy when fourth in the Premiere Stakes and then ran third to Lucky Hussler in the Group 3 $150,000 Sportingbet Moonga Stakes (1400m) at Caulfield on October 18.

At his latest start Generalife was only beaten three quarters of a length when third to Group 1 Emirates Stakes winner Hucklebuck in the Group 3 $200,000 Yellowglen Stakes (1400m) at Flemington on Derby Day.

The Anthony Freedman trained Reparations is also nominated for the Kevin Heffernan Stakes and is the equal top rated sprinter in the field with Generalife.

David Hayes and Tom Dabernig have nominated two, Fast’N’Rocking who is looking to back up after running third in the $100,000 Emirates Airline Handicap (1400m) at Flemington last Saturday and the lightly raced three year old Shaf who was a last start fourth in the Group 3 $150,000 Telstra Phonewords Stakes (1200m) at Moonee Valley on Cox Plate Day.