It’s been a breakout season for Triple Crown Syndications and Vinery Stud’s Mossman so it seems fitting the two should combine with Dothraki is Saturday’s Group III Gold Coast Guineas (1400m).

Completing a stakes double for trainer Gerald Ryan after winning the Prime Minister’s Cup with Dances On Stars, Dothraki staved off the fast finishing Safeguard (Exceed And Excel) to win by a head. 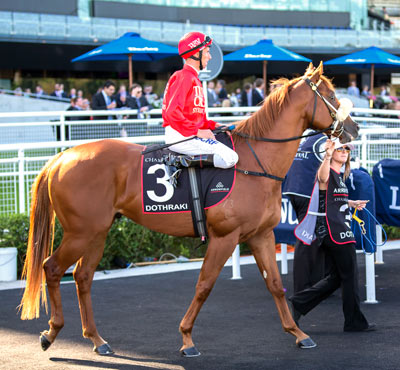 It was the second stakes win for the 3yo son of Mossman after capturing the Listed Hilton Hotels Stakes at Flemington last November.

“We just got there but the horse had done all the work on speed so he deserved it,” Ryan said.

“He’s always shown ability but has continued to improve as he’s matured.

“He could be in for a good carnival.”

Dothraki was a $45,000 Magic Millions National Yearling Sale purchase for Triple Crown Syndications from the draft of Baramul Stud and is the third winner for Volantis, a half-sister by Flying Spur to Group III winner Simonstad.

Volantis died in 2011. Her final foal is a 2yo Big Brown (USA) gelding named Volcanic Bling.