By NATHAN EXELBY
The Courier-Mail

PETER Snowden stamped himself as the undisputed modern day king of the Caulfield Guineas and rated Saturday’s win perhaps the most special of his career, because he did it with his son Paul. 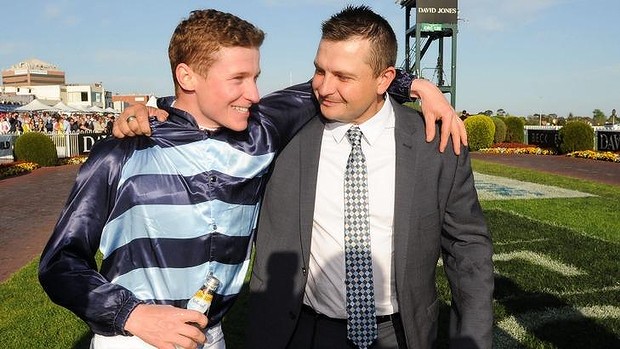 ‘Team Snowden’ only started their official partnership in May this year, but in reality Paul has been his father’s right hand man for a long time.

While at Darley, Snowden etched his name in the Caulfield Guineas record books with Helmet and Long John and he was deputy to John Hawkes when Lonhro won in 2001.

But none of them compared to Saturday.“That means more to me than Helmet and Long John because I’ve done it with my son,” Peter said from Sydney.

At Caulfield Paul fought back tears as he rejoiced in his first official Group 1 win as a trainer.

“It’s the same as it always was, but my name is next to him in the book now,” he said.

There has been little doubt since the outset that Team Snowden would be a powerful force in Australian racing and owners knocked down their doors from day one, but clearly, leaving the might of Shiekh Mohammed’s Darley Australia operation is still raw.The irony of Saturday’s win is that Shooting To Win was inherited off John O’Shea when he took over from Snowden at Darley.

“He got a few good ones in return!” Snowden said.

O’Shea regarded Shooting To Win as the most promising horse in his stable at the time and it didn’t take the Snowdens long to understand why.

“We found out he was special on the very first day,” Paul said.

“The way he works – he makes Group 1 horses look like midweekers.”

The Guineas is yet another Australian feature that New Zealand whiz kid James McDonald can tick off.

In the past 18 months he’s won the Golden Slipper, AJC Oaks, Queen Elizabeth Stakes, AJC Derby and now Caulfield Guineas – all races worth $1 million or more.

“It’s just unbelievable,” he said.
← Charlie In. Charline Out
In the trainer’s hut with Snowden Racing (Part 3) →
Tweets by @TripleCrownSynd