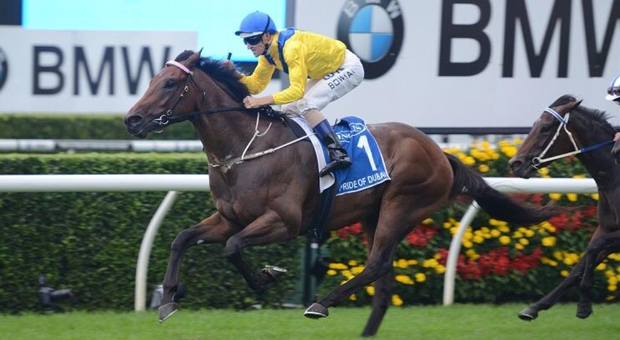 Dual Group I winning colt Pride Of Dubai is back in work and the Snowden stable are targeting two of the biggest three-year-old races on the calendar.

The son of Street Cry was given a winter spell after overcoming serious interference to win the Group I Blue Diamond Stakes (1200m) at Caulfield before a tough victory in the Group I Sires Produce (1400m) at Randwick.

“This is his fourth week in from the paddock and he’s come back in great order,” Peter Snowden said. “He’s always been a big horse but has come back a little heavier this time. He has really furnished.”

Peter and Paul Snowden have pinpointed the Group I Golden Rose (1400m) at Rosehill on September 12 and the Group I Caulfield Guineas (1600m) at Caulfield on October 11 as Pride Of Dubai’s two major spring targets.

“We’ve just got to work out where we will kick-off the campaign,” Snowden said. “He isn’t going to be well weighted against the three-year-olds as he gets a 4kg penalty (in the San Domenico Stakes and the Run To The Rose) for being a Group I winner.

“The Warwick Stakes is a 1400-metre weight-for-age race on August 22 so that might be the right option.

“He’s a colt so it’s important to protect his profile. If that means having only one or two runs into the Golden Rose then that’s what we’ll do.

“He’s always had a great attitude and that hasn’t changed.”

Pride Of Dubai should be ready to trial by mid-July.