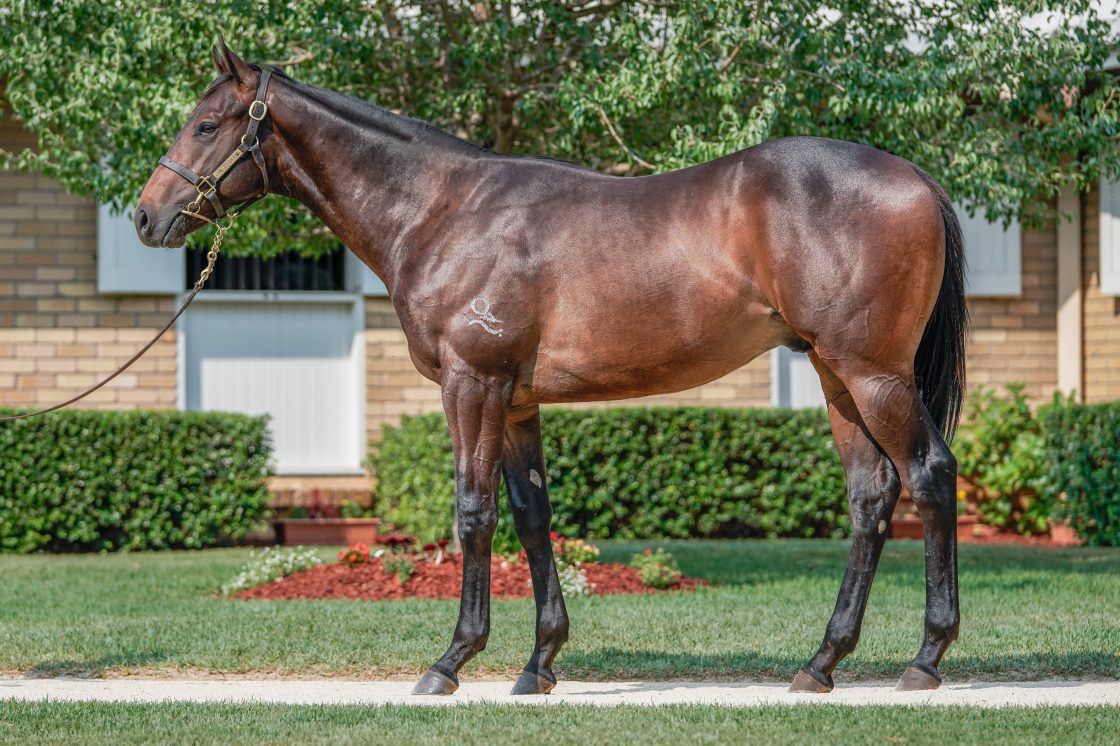 We were just so happy to secure this colt. First and foremost he’s a terrific type – well balanced and a great mover.

What’s more, the chatter around his first season sire ASTERN is incredible. ASTERN really throws them to type (as this colt is testimony to) and we all know what he did on the track: winner of 3 from 4 as a 2YO including the Group 2 Silver Slipper, he would come back at 3 to capture the ‘stallion making’ Group 1 Golden Rose Stakes.

His sire, MEDAGLIA D’ORO is a proven source of juvenile talent (including Champion Colt and Group 1 Golden Slipper winner VANCOUVER), while there is a great deal of speed in the dam’s side as well.

Indeed, both the dam SPEEDWAGON and her sister SCHIFFER (Randwick winner & 3rd in the Magic Millions 2YO Classic) revealed their best at 2.

And just to top it all off, SPEEDWAGON’s grandsire REDOUTE’S CHOICE has ‘nicked’ particularly well with MEDAGLIA D’ORO, yielding 12 winners – among them Group 1 winner FLIT and last season’s multiple stakes winner POHUTUKAWA.

Watch the video below to see our stunning Astern colt parade.

There’s a very good reason why ASTERN was one of the most popular First Season Sires at this year’s Magic Millions Gold Coast Yearling Sale, with his youngsters selling for up to $725,000.

Primarily it’s because the Group 1 winning son of MEDAGLIA D’ORO is really throwing them to type: terrific conformation and wonderful action.

ASTERN, in so many ways, is exactly what you look for in a stallion. As a 2YO, he won 3 of his 4 outings including the Group 2 Silver Slipper Stakes (also won by PIERRO) and the Group 3 Kindergarten Stakes.

At 3, ASTERN would resume with a win in the Group 2 Run To The Rose before racing away with the Group 1 Golden Rose Stakes by over 2 lengths (7 of the last 8 winners of the Golden Rose are now at stud!).

ASTERN then finished a lip 2nd to Russian Revolution in the Group 2 Roman Consul before ending his spring with a 2nd to Flying Artie in the Group 1 Coolmore Stud Stakes.

ASTERN’s sire, MEDAGLIA D’ORO, is a renowned source of juvenile talent and among his 138 stakes winners of $170 million are Champion 2YO Colt and Golden Slipper winner VANCOUVER, plus dual Group 1 winning 2YO BOLT D’ORO.

ASTERN loses nothing on the dam side either: he is a ½ brother to Champion 3YO Filly and 3-time Group 1 winner ALIZEE, last year’s Group 2 Silver Slipper runner-up TASSORT and multiple stakes-placed MOGADOR, while his dam ESSAOUIRA was a city winner at 2.

She was something of a SPEEDWAGON alright … finishing in the top 4 in all bar one of her race starts, SPEEDWAGON ended up a dual winner after scoring on debut as a 2YO by over 2 lengths.

This is only SPEEDWAGON’s 2nd foal, but she is a sister to the Gerald Ryan-trained SCHIFFER, a winner at Randwick at 2 before heading to the Gold Coast for a 3rd behind KARUTA QUEEN in the $2 million Magic Millions 2YO Classic. At 3, SCHIFFER would return to the Coast to take out the Magic Millions Sprint.

SPEEDWAGON is also a ½ sister to 5 other winners, among them WETAKEMANHATTAN (6 wins), WALLOON REGION (5 wins) and PERFECT MATCH (5 wins).

The bloodlines are magnificent!