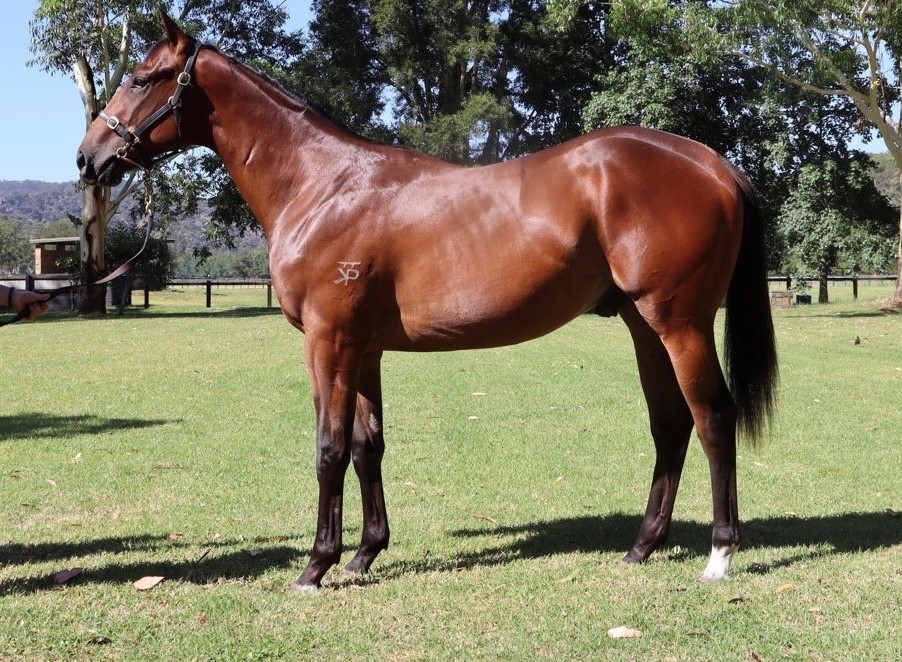 Lot 487 Brazen Beau x Lost Without You Colt from Rorison Media on Vimeo.

When we first inspected this colt it was obvious to us that he looks every inch the ‘early comer’, and the Snowdens will be giving him every chance to compete at next year’s Magic Millions 2YO Classic.

It makes sense … not only does he look very forward and athletic, his sire BRAZEN BEAU was an exceptional 2YO who went on to become Australia’s Champion 3YO Colt, with Group 1 victories in the Coolmore Stud Stakes and Newmarket Handicap.

What’s more, this colt is the first foal of a 2YO-placed Stratum mare who is out of SO DETACHED –a multiple 2YO stakes-placed sprinter. Yet, even a quick glance at the pedigree will show you that this colt has the potential to race on at 3 and 4. BRAZEN BEAU’s runners to date include Group 2 Guineas winner PRETTY BRAZEN and the literally Up & Coming NORTH PACIFIC, who finished 2nd to Ole Kirk in last year’s Group 1 Golden Rose Stakes, while LOST WITHOUT YOU is closely related to Group 2 Brisbane Cup winner SEDANZER.

Others in the pedigree include a Champion 2YO Colt in YOURDEEL, a Group 1 Rosehill Guineas winner in DEALER PRINCIPAL and dual Group 1 Queen Elizabeth hero GRAND ARMEE. 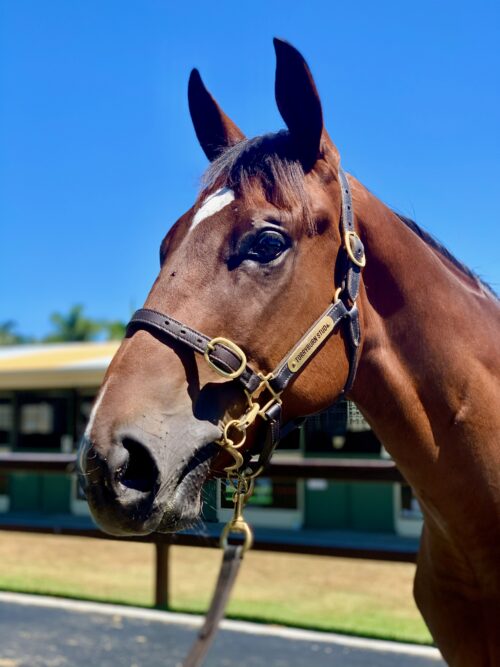 It’s somewhat fitting that BRAZEN BEAU was the first horse to put super sire I AM INVINCIBLE on the map and is now leading the way for his growing reputation as a sire-of-sires.

BRAZEN BEAU was an immediate success on the track, winning his 2YO maiden by 4.5 lengths before going on to capture the Group 2 Champagne Classic and finish second in both the Group 2 Sires’ Produce and Group 1 JJ Atkins – by a neck and a head respectively.

BRAZEN BEAU then travelled to Royal Ascot where he produced a brilliant ½ length second in the Group 1 Diamond Jubilee. Accordingly, BRAZEN BEAU was named Australia’s Champion 3YO Colt.

Retiring to Darley’s Victorian stud operation in 2015, BRAZEN BEAU has been one of the most popular stallions in the country – covering over 700 mares – and he’s off to a brilliant start with his Stakes winners, including PRETTY BRAZEN (multiple Group 2 winner), unbeaten KARAKA MILLION winner ON THE BUBBLES and the highly impressive NORTH PACIFIC, winner of the Group 3 Up & Coming Stakes and runner-up to Ole Kirk in the Group 1 Golden Rose Stakes last spring.

The leading 2nd Season Sire by stakes winners in 2019/20 (ahead of DEEP FIELD and RUBICK), BRAZEN BEAU was ahead of I  AM INVINCIBLE, SNITZEL and LONHRO at the same stages of their careers.

There really is tremendous scope to this pedigree and you can understand why the breeder sent LOST WITHOUT YOU to BRAZEN BEAU for her first season at stud.

A daughter of REDOUTE’S CHOICE stallion STRATUM (46 stakes winners & broodmare sire of 155 winners, including Triple Crown’s Group winner Moss Trip), LOST WITHOUT YOU was placed as a 2YO and is a daughter of classy 2YO SO DETACHED, who was placed in both the Listed Gimcrack and Listed Widden Stakes as a juvenile.

But here’s where it gets really interesting: SO DETACHED is a ½ sister to SEDANZER, a winner of 8 races and over $800,000 including the Group 2 Brisbane Cup over 2200m, while their dam is a ½ sister to Group 1 Rosehill Guineas (over 2000m) winner DEALER PRINCIPAL.

Other relations featured in the pedigree are Champion GRAND ARMEE (7 Group 1 wins inc 2 x Queen Elizabeth Stakes) and REDOUTE’S CHOICE’s Group 1 Oaks winner ANAMATO, but there are sprinters galore too, with DRUM a Group 1 Oakleigh Plate winner, 2YO stakes winners ANAMBA and ANAMOE, along with Champion NZ 2YO YOURDEEL.

So much versatility, although this BRAZEN BEAU colt is a good candidate to run early and will be aimed at next year’s Magic Millions 2YO Classic.

He is also SUPER VOBIS eligible which means he has the opportunity to run for millions of dollars in extra bonuses over and above any prizemoney in Victoria!