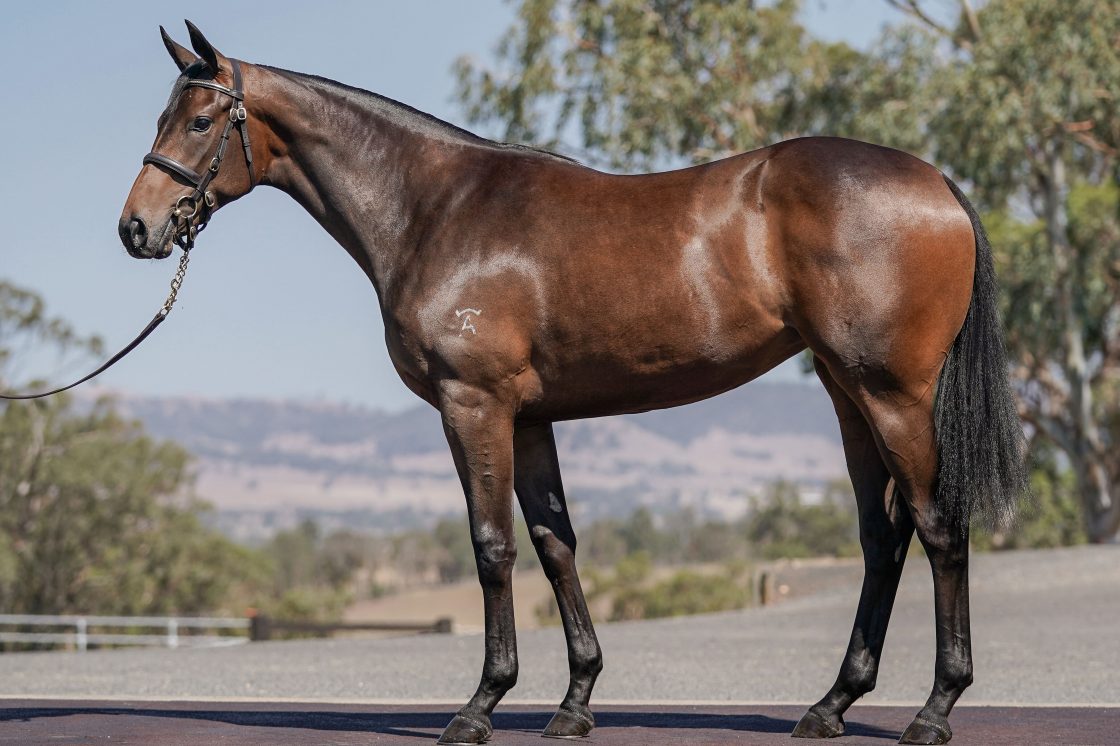 This is one yearling we were always going to have a very close look at.

For starters, she is by EPAULETTE: a stallion that we’ve had so much success with via Triple Crown’s dual Group winner MILITARY ZONE and the unbeaten filly MILITARY MAGIC, along with CHARRETERA and CRIMLET.

One of the other great attractions is that this filly is from an ENCOSTA DE LAGO mare who is a full sister to the dam of MOHAVE, a stakes winner at 2 and 3, who was also trained by Peter Snowden. Peter, of course, trained EPAULETTE too so this filly really is keeping it in the family.

Now, back to ENCOSTA DE LAGO for a moment. He was a phenomenal sire, but likewise a tremendous broodmare sire with his daughters producing 104 stakes winners. The ‘nick’ has already worked for us with Randwick winner CHARRETERA, while the match up with Epaulette’s sire, COMMANDS, has produced 18 winners.

Pedigree aside though, this filly really caught our eye at the sales – she’s so well balanced and a terrific mover – and, on top of it all, she’s a half-sister to multiple Hong Kong winner DREAM WARRIORS, who notched another career victory just last month.

EPAULETTE is rapidly establishing himself as one of the most prolific sires in Australia. Although his oldest crop are only 4YOs, he is already one of the leading sires by winners with 40 individual success stories to his credit this season.

One of those winners, of course, is Triple Crown’s unbeaten filly MILITARY MAGIC – 3 from 3 – while other EPAULETTEs to carry the famous red silks to victory include multiple Group winner MILITARY ZONE, Randwick winner CHARRETERA and CRIMLET, a winner of successive races in December (2 wins & a placing from 4 starts overall). Aside from the Triple Crown highlights, EPAULETTE is also the sire of Champion South African 2YO, SOQRAT, and the Group winning 2YOs MERYL, KHULAASA etc.

Watch the video below to see the experience of racing an Epaulette filly with Triple Crown and Peter & Paul Snowden.

A three-quarter brother to HELMET and brilliant winner of the Group  1 Golden Rose Stakes, EPAULETTE was a stunning colt from a golden era of Australian juveniles. His run to the Golden Slipper included victory in the valuable  Black  Opal  Stakes  before  he  claimed  Group 1  victory  as  a  three-year-old  in  the  prestigious Golden Rose. A further Group 1 success followed in the Doomben 10,000, in a race where he defeated eight Group 1 winners as a three-year-old, including YOUR SONG and BUFFERING.

A consistent  performer,  EPAULETTE  finished  a  neck  runner-up  behind  PIERRO  in  the  Group  2  Todman Stakes and placed behind ALL TOO HARD in the Group 1 Caulfield Guineas over a mile. As a 3YO he was runner-up to BLACK CAVIAR in the TJ Smith Stakes.

The  best-performing  son  of  Champion  Sire  COMMANDS  (79 stakes winners), he showed a tremendous aptitude for racing and a tough resilience. From his 14 starts he finished in the top three on nine occasions to earn $1.7 million in prizemoney during his career.

To match his exploits on the track, EPAULETTE has a stellar pedigree behind him, being the three-quarter brother to champion 2YO HELMET (and sire), and Group 2-winning filly PEARLS, while he is a half-brother to Group 1 winner and sire BULLBARS.

Peter  Snowden  engineered  EPAULETTE’s superb racing career, and there is no better trainer to look after this filly!

This filly has such a promising pedigree … even more so when you match the mare up with EPAULETTE.

First off though, the young ENCOSTA DE LAGO mare MITZI has had one to the races at this stage: the Hong Kong galloper DREAM WARRIORS who has won 2 races this season, including the Longines International Jockey Championship at Sha Tin in December.

MITZI, meanwhile, is a full sister to the Melbourne Group-placed sprinter MARGHAM, in turn the dam of Exceed And Excel’s 2YO stakes winner MOHAVE, who also ran second on debut in the Listed Breeders’ Plate. A multiple city winner at 3, Mohave would go on to win the Listed Queensland Day Plate as well.
(Interestingly, Peter Snowden trained both EPAULETTE and MOHAVE so you’d have to say he’s quite familiar with the pedigree!).

Speaking of Champion Sires, ENCOSTA DE LAGO’s daughters have produced a remarkable 104 stakes winners (well over 1500 winners … with Triple Crown’s Randwick winner CHARRETERA among them), while the Encosta match up with EPAULETTE’s sire COMMANDS has yielded 18 winners.