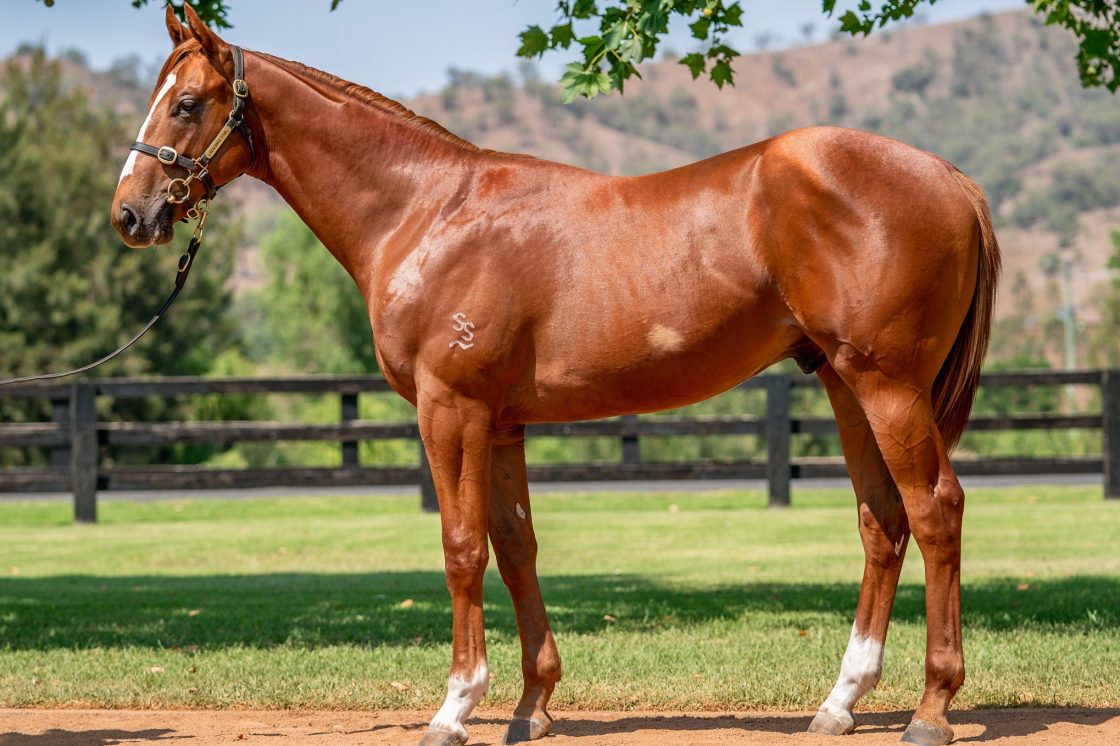 This colt pretty much sells himself. Like so many of the Exceed And Excels, he has textbook conformation and is such an exciting prospect.

As for EXCEED AND EXCEL, what more can you really say? A brilliant sprinter by the legendary DANEHILL, he was always destined to end up at stud, but he has – excuse the pun – exceeded all expectations with multiple sires’ premierships (both as a Champion General Sire and Champion 2YO Sire), over 1400 winners and 165 stakes winners worldwide.

Point is, he just seems to keep getting better with his current runners including 2019 Group 1 winners BIVOUAC (Golden Rose), EXCEEDANCE (Coolmore Stud) and MICROPHONE (ATC Sires’ Produce), while his older sons – such as SIDESTEP (sire of 2019 Golden Slipper winner KIAMICHI) and HELMET (sire of dual Dubai World Cup winner THUNDER SNOW) are really doing the job at stud.

As for the colt’s Group 2 winning & Group 1 performing dam, MY CHICHARITA? Her only 2 runners are winners.

There is so much upside to this bloke and he could have a big future in front of him.

Arguably the greatest testimony to the popularity of EXCEED AND EXCEL is the $1.8 million yearling at the 2020 Magic Millions Gold Coast Sale.

DANEHILL’s multiple Group 1 winning sprinter just goes from strength to strength and, from Reward For Effort winning the Group 1 Blue Diamond in 2009 to Exceedance’s 2019 Group 1 Coolmore Stud Stakes victory, he remains a megastar of the Australian breeding barn.

Importantly, the sons of EXCEED AND EXCEL are making their mark at stud too with SIDESTEP being the sire of – in his first crop – the 2019 Group 1 Golden Slipper winner KIAMICHI, while HELMET is the sire of dual Group 1 Dubai World Cup winner THUNDER SNOW.

A remarkable sprinter who won the Group 1 Newmarket and Group 1 Sir Rupert Clarke Stakes, EXCEED AND EXCEL is one of the best performed sons of the legendary DANEHILL and has already produced 6 stakes winners this season (equal 2nd) with the likes of BIVOUAC (Group 1 Golden Rose) and EXCEEDANCE (Group 1 Coolmore Stud Stakes).

A major source of juvenile winners – a Champion Australian Sire of 2YOs – EXCEED AND EXCEL is also the sire of 2019 Group 1 ATC Sires’ Produce winner MICROPHONE.

It’s little surprise that MY CHICHARITA has been ‘bred up’ since first heading to the breeding shed.

MY CHICHARITA is also from a ½ sister to Last Tycoon’s brilliant sprinter/miler LE ZAGALETTA (9 stakes wins), while the 3rd dam – SWIFTSYND – was a Group winner at Flemington and multiple Group 1 placed.

So, nothing has been left to chance with MY CHICHARITA’s stint at stud, covered by REDOUTE’S CHOICE (producing 6-time winner Awake The Stars), MEDAGLIA D’ORO (producing Flying Arion, a winner & 2 placings from his only 3 starts) and the unraced SNITZEL 2YO filly Obtain, currently in training with Team Hawkes.