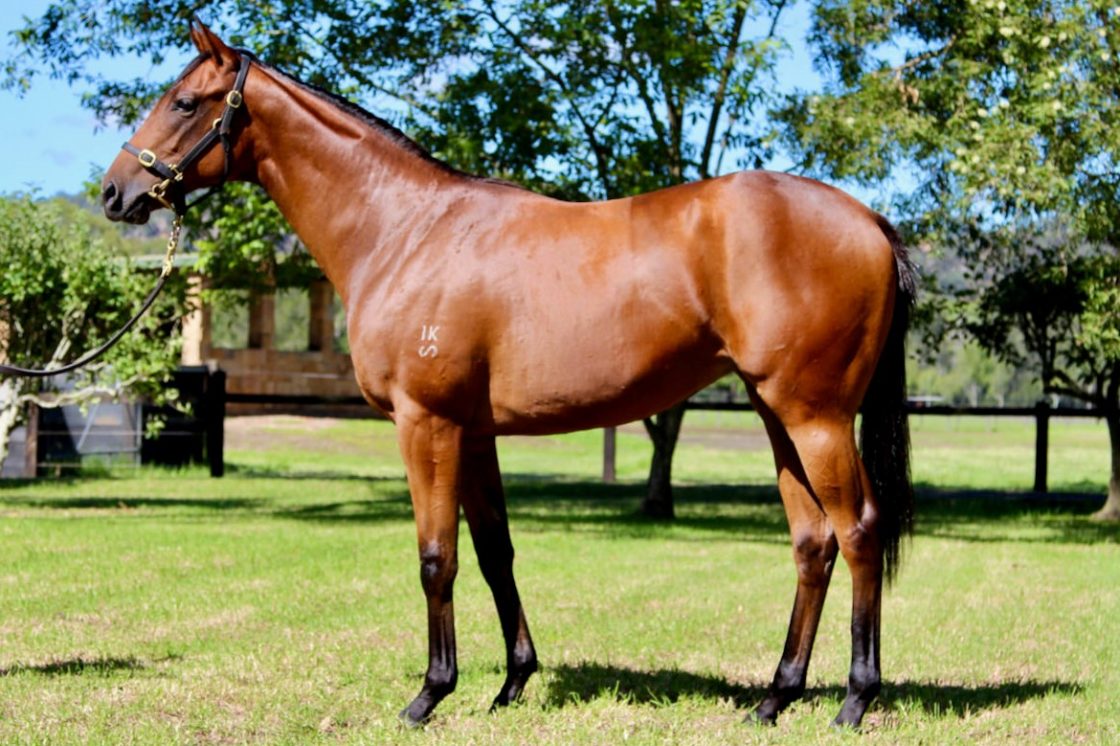 There is so much to like about this filly and she was an absolute standout at the sale.

She is a beautiful mover, so well balanced and looks a step ahead of her peers – that’s why we’re confident she’s the type of filly to run early … and run fast!

Her sire certainly did just that. There is a lot of talk around EXTREME CHOICE and he’s producing athletic types, which is hardly surprising given what a great racehorse he was. His victory in the Group 1 Blue Diamond – a renowned source of stallion talent – was rated the equal highest in 25 years by Timeform, and EXTREME CHOICE then resumed at 3 with a Group 1 AJ Moir Stakes victory against CHAUTAUQUA and BUFFERING.

This filly, meanwhile, is only the second foal of the Godolphin bred & raced SEAGROVE, a daughter of renowned speed influence EXCEED AND EXCEL and a sister to SAN DIEGO – a multiple winner at two who trained on to be Group 2-placed.

There is plenty of speed and precocity in the first couple of dams, while the presence of Group 1-winning champion mare HILL OF GRACE and Group 2 winner RENEWABLE make this a truly regal pedigree!

In terms of stallion prospects, this bloke is definitely the right ‘choice’.

EXTREME CHOICE was an outstanding 2YO and, given his precocity and athleticism, he’s clearly the heir apparent to his illustrious sire NOT A SINGLE DOUBT, who sadly no longer stands at stud.

Exploding on the scene with a dominant victory in the $500,000 Inglis Nursery, EXTREME CHOICE absolutely blew them away in the Group 3 Chairman’s Stakes, winning by nearly 5 lengths.

With a record of 2 from 2, EXTREME CHOICE repeated the dose in the Group 1 Blue Diamond Stakes, again scoring comfortably and earning a Timeform rating of 124. Indeed, he was the equal-highest Timeform rated Blue Diamond winner in 25 years!

It’s worth noting that the Blue Diamond is a remarkable source of stallions, with EXTREME CHOICE’s grandsire, REDOUTE’S CHOICE, a multiple Champion Australian Sire also winning the race. Other Blue Diamond winners in the last 10 years who became sires include SEPOY (trained by Peter Snowden), STAR WITNESS and REWARD FOR EFFORT.

His exploits as a two-year-old saw him become the highest-rated juvenile colt EVER from the hugely influential REDOUTE’S CHOICE sire line.

What stands EXTREME CHOICE apart, however, is that he resumed at three with a belting win in the Group 1 AJ Moir Stakes … where he left the likes of multiple Group 1 winners CHAUTAUQUA and BUFFERING in his wake!

Extreme Choice was a speed machine and this filly’s dam certainly brings her fair share of speed to the table!

SEAGROVE is by renowned speed influence EXCEED AND EXCEL (broodmare sire of 41 stakes winners) and is a sister to the 5-times stakes placed SAN DIEGO. A multiple winner over short courses, SAN DIEGO was a lip second to subsequent Group 1 winner POLANSKI in the Group 3 Norman Robinson.

SEAGROVE’s half sister, SOLEDAD, was also stakes placed and a winner of $370k in prizemoney. She was an out and out sprinter, finishing 2nd in the Listed Takeover Target Stakes, and her career was masterminded by the Snowdens, so it’s a family that our illustrious trainers know very well!

With the 2nd and 3rd dams boasting 14 winners between them – this filly is only SEAGROVE’s 2nd foal but looks destined to join that list of celebrated winners. Other close relations include Champion Kiwi Mare and Group 1 winner HILL OF GRACE (also 5x Group 1 placed), Caulfield Group 2 winner RENEWABLE and Randwick-trained 4YO PURPLE SECTOR, winner of last year’s Group 3 Rough Habit Plate.

With a 4 x 3 cross to DANEHILL, there’s an interesting ‘nick’ with this filly’s second dam, DEL MAR, a daughter of ZABEEL. The NOT A SINGLE DOUBT x ZABEEL match up has produced 20 winners – 3 of them at stakes level – including Group 1 winner CLEARLY INNOCENT.