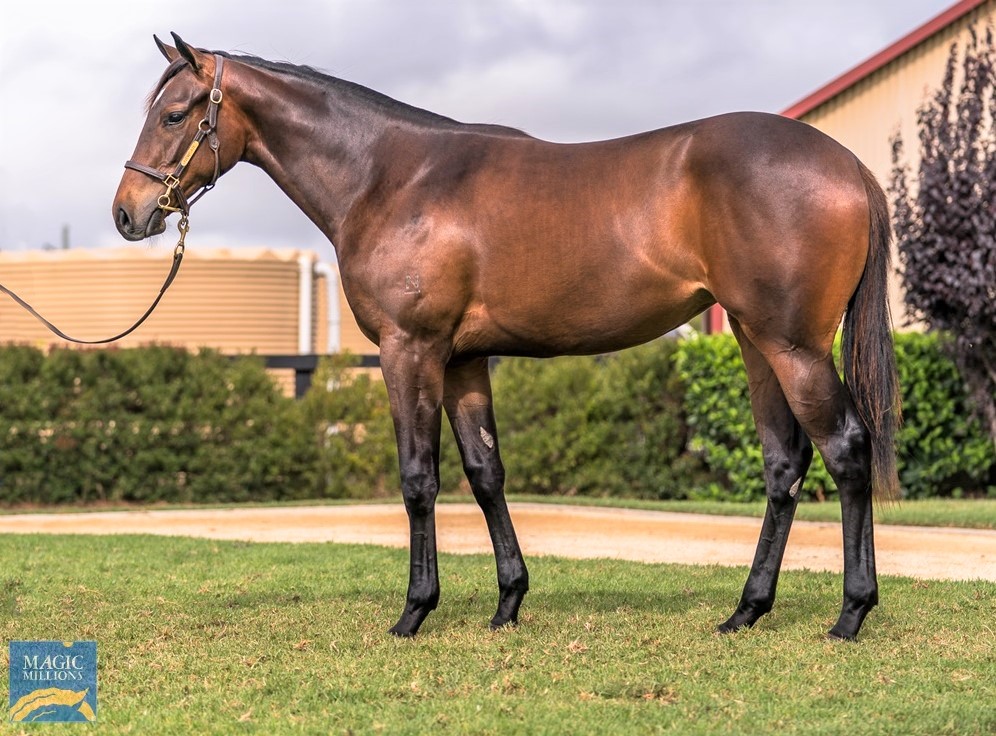 Let’s face it, you’re on to a winner before this filly even sees a racetrack!

First off, the filly is a real stunner – beautifully put together – and a real stand out when she walks.

Then there’s her sire HELLBENT, whose first crop sold up to half a million on the Gold Coast. HELLBENT’s sire I AM INVINCIBLE needs little introduction and HELLBENT is one of his fastest runners, winning the Group 1 William Reid Stakes and finishing no worse than 4th in all but one of his 5 starts at Group 1 level – a consistent elite level performer!

As for the pedigree, this filly is a ½ sister to CARACARO, who was recently snapped up for stallion studies at US stud Crestwood Farm. A winner & 3-times runner-up from only 4 starts, CARACARO’s burgeoning career came to a premature end following a trackwork injury, but he was considered a major Kentucky Derby contender after running 2nd in the Grade 1 Travers Stakes. He was behind 4 x Group 1 winner TIZ THE LAW that day, who had won the Belmont Stakes (final leg of the US Triple Crown) on his previous start. TIZ THE LAW now stands at Coolmore’s Ashford Stud in Kentucky!

Given that this filly’s granddam is an elite mare too (Group 2 winner and 4 x Group 1-placed, inc as a 2YO) the residual value prospects alone makes her a very attractive prospect.

There is little doubt that I AM INVINCIBLE is the hottest stallion property in Australia and it comes as little surprise that his sire sons are very much in demand … especially when those sons are lightning-fast Group 1 winners who “throw them to type”.

HELLBENT was certainly fast! A winner of 7 races from 1000m to 1200m, HELLBENT capped his marvellous career with a Group 1 victory in the William Reid Stakes – in near record time – off the back of a neck 3rd in the Group 1 Oakleigh Plate at his penultimate start.

Winning on his only start at 2, HELLBENT also won his first start at 3 (defeating 3 x Group 1 winner LE ROMAIN by 4 lengths) & then 3 of his first 4 starts as a 4YO! It’s worth noting that in all bar one of his runs at Group 1 level – which included a win & 2 placings – he never finished worse than 4th and could be considered unlucky not to have won the 2017 William Reid & 2018 Oakleigh Plate.

A magnificent looking dark bay, HELLBENT is the spitting image of his sire I AM INVINCIBLE and is throwing similarly nice types.

Inbred 3 x 3 to stud legend, GREEN DESERT, HELLBENT is among 9 Group 1 winners for I AM INVINCIBLE, who produced 28 stakes winners in 2018/19 (breaking the Australian record previously held by breed shapers DANEHILL & SNITZEL).

HELLBENT is out of the VOLKSRAAD mare VOLKASPRAY and hails from the family of Golden Slipper winner PAGO PAGO. 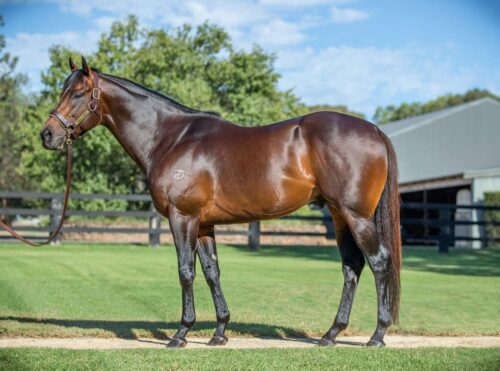 Our Hellbent filly is definitely in the mould of her sire, pictured above.

There is so much to like about this filly before you even get to her pedigree, but here’s the real bonus.

Firstly, PEACE TIME – a daughter of leading US stallion WAR FRONT – has started her career at stud in exceptional fashion.

Her first foal to race, CARACARO, was genuinely special. His trainer, Gustavo Delgado, was quoted the following in a leading US racing publication: “Caracaro from day one was very talented and performed brilliantly at the highest level.  I consider Caracaro to be a horse in another category, and the best horse I have ever trained.”

CARACARO ran 2nd to TIZ THE LAW in the Grade 1 Travers Stakes (TIZ THE LAW had previously won 3 Grade 1s and went on to finish 2nd in the prestigious Kentucky Derby).

Given PEACE TIME’s bloodlines and her start at stud duties, she has the makings of an outstanding broodmare.

A US$600,000 yearling, PEACE TIME is a ½ sister to the dam of stakes winner BOMBSHELL & stakes placed LITTLE DISTORTED (13 wins), while her dam is the elite racemare SANTA CATARINA – a Group 2 Hollywood Oaks winner and 4 x Group 1 placed.

Notably, this filly also hails from the same family as a pair of Royal Ascot winners in France’s Champion 2YO Filly CULTURE VULTURE and multiple Group 2-winning 2YO APPROVE. 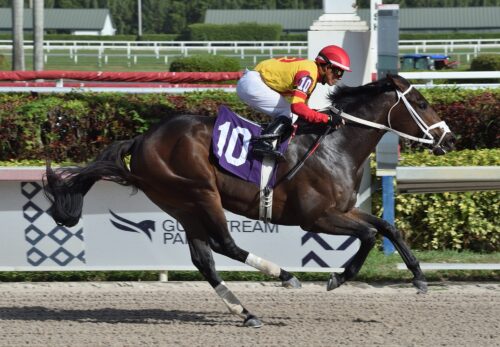 Caracaro – The Grade 1-placed half-brother to our Hellbent filly.

This filly is also BOBS (Breeder Owner Bonus Scheme), and BOBS EXTRA eligible, which means she will be running for millions of dollars in extra bonuses over and above any prizemoney. For example (using some standard race figures):