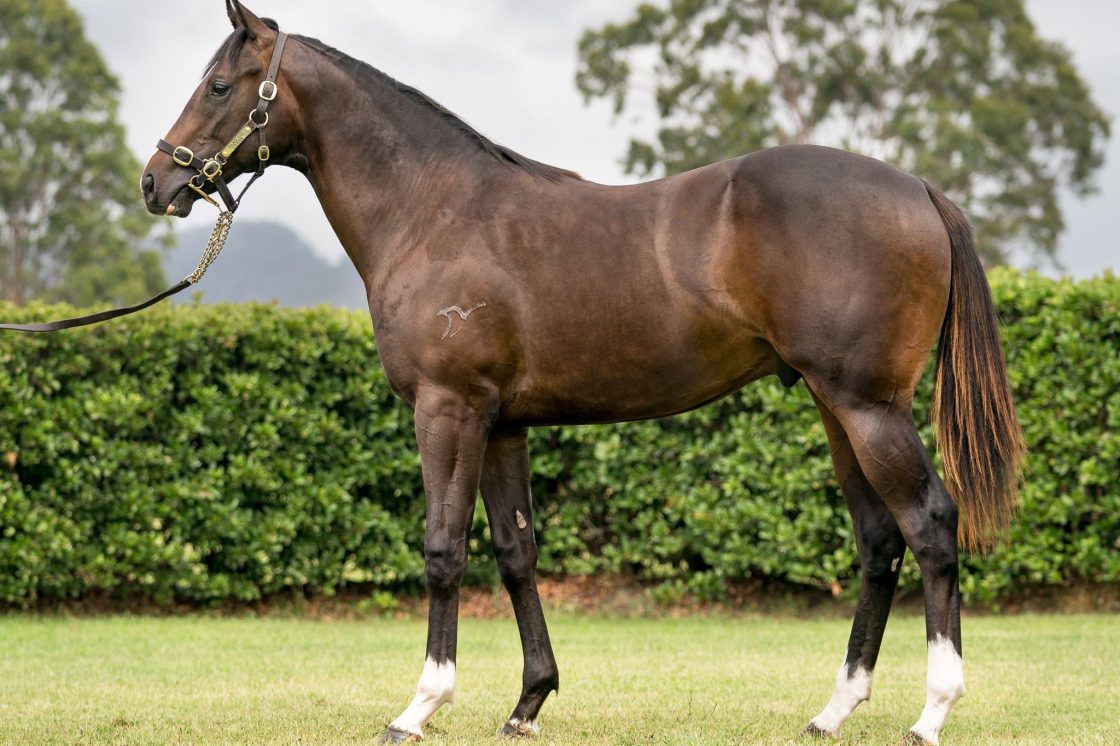 We’re just so excited to get this colt and he looks like he could be an exceptional racehorse!

There’s been so much ‘noise’ around the Gold Coast and Sydney sales complexes regarding MAURICE’s first crop of yearlings and little wonder why: he was Horse of the Year in Japan (and we all know how good the Japanese horses run!), he’s been gifted with outstanding mares and, fittingly, has produced some incredible types … this bloke among them.

We immediately fell in love with this colt – from the minute we saw him. A stunning type and an absolute weapon.

What’s more, CHATELAINE’s winners include the Champion 2YO Filly (& Golden Slipper runner-up) HEADWAY, who would go on to capture the Group 1 Coolmore Stud Stakes in the spring.

It would have been hard to walk away from this colt and we’re really looking forward to racing him.

If all the above wasn’t enough, Parsons Creek Farm, the breeders of this colt, loved him so much that they have purchased back into him!

How’s that for a vote of confidence!?

Watch the video below to hear more about why his breeders decided to stay in him!

Maurice is unquestionably one of the most exciting young sires in Australia!

Rated the best Japanese racehorse to ever stand at stud outside of Japan, this outstanding colt is from the first crop of Maurice in Australia.

In a remarkable racetrack career, Maurice was named Japan’s Horse of the Year and, importantly, also regarded as the country’s best sprinter AND No.1 miler.

A multiple winner at 2, Maurice would go on to capture 3 Group 1s at 3 and 4 years, including the Yasuda Kinen – consistently ranked among the world’s best mile contests.

Not only that, Maurice travelled to Hong Kong where he captured the international Group 1 Longines Hong Kong Mile, before returning 6 months later to double his Group 1 feat by winning the Hong Kong Champions Mile.

As a 5YO, Maurice would depart racing on a memorable high, winning the Group 1 Tokyo Tenno Sho on home turf before his swansong in Hong Kong, where he blew them away (by 3 lengths) in the Group 1 Hong Kong Cup.

Ultimately, Maurice would be allotted a World Thoroughbred Ranking of 217 in 2016 – the 3rd highest turf horse on the planet.

Maurice is the best son of Roberto-line stallion, Screen Hero, a winner of the Group 1 Japan Cup and from a daughter of Japan’s greatest ever stud influence, Sunday Silence.

There is a ton of speed in this pedigree! CHATELAINE ran second on debut in the Listed Widden Stakes at 2 & finished 2nd to Champion VICTORY VEIN (& beat home Golden Slipper winner CALWAY GAL) in the Group 2 Silver Shadow Stakes at 3.

A multiple winner in Sydney, CHATELAINE also finished 3rd in the Sheraco, 2nd in the Research and 3rd in the RN Irwin – all at stakes level.

However, the FLYING SPUR mare has really left her mark at stud with the brilliant HEADWAY – who raced in the famous Makybe Diva silks – winning the Listed Pol Roger and Group 3 Sweet Embrace in successive starts at 2 before finishing 2nd in the Group 1 Golden Slipper having come from the tail of the field.

HEADWAY returned at 3 with a brilliant victory in the Group 1 Coolmore Stud Stakes and ultimately finish her career with nearly $1.2 million in stakes.

HEADWAY’s full brother, Beckon, won 4 in Sydney and Melbourne, while the full sister, Empress Matilda, was a winner in Sydney too.

CHATELAINE is also the granddam of LET ME SLEEP ON IT, a winner at 2 before going on to land the Listed Redoute’s Choice Stakes at 3.