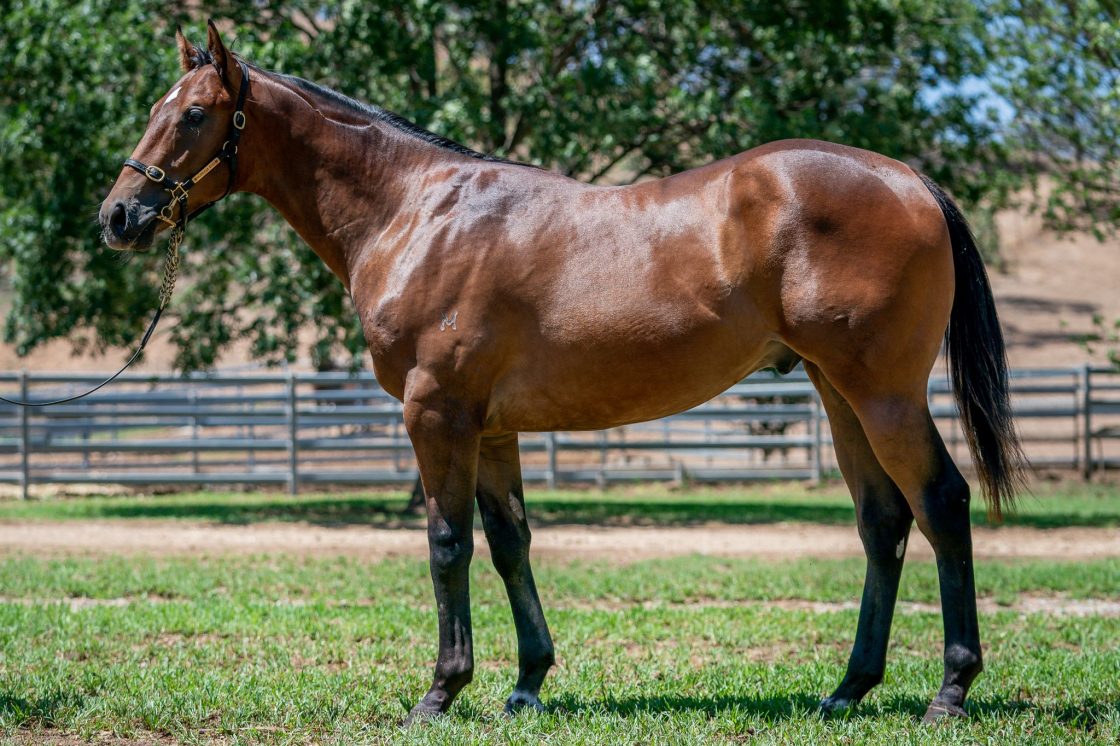 This colt caught our attention from the word go and has Golden Slipper written all over him!

Firstly, he’s a cracking type by the exciting (and we do mean exciting!) MAURICE who has his first crop of yearlings up for grabs in 2020. MAURICE was Horse of the Year in Japan (and we all know how good the Japanese horses run!) … he’s been gifted with outstanding mares and … fittingly, has produced some incredible types … this bloke among them.

MAURICE factor aside, the colt appears to be really quite precocious and should be ideal for the early 2YO races which, of course, he’s nominated for.

That’s hardly a pipedream when you look at the family around him: genuine 2YO speedsters like ABSOLUTE FLIRT, PRESSING, CHOICE BRO and his granddam BROOKE’S EXPRESS all gave connections plenty of thrills, with many training on as older horses.

If you’re looking to ‘flirt’ with early success this could well be the colt for you!

Maurice is unquestionably one of the most exciting young sires in Australia!

Rated the best Japanese racehorse ever to stand at stud outside of Japan, this outstanding colt is from the first crop of Maurice in Australia.

In a remarkable racetrack career, Maurice was named Japan’s Horse of the Year and, importantly, also regarded as the country’s best sprinter AND No.1 miler.

A multiple winner at 2, Maurice would go on to capture 3 Group 1s at 3 and 4 years, including the Yasuda Kinen – consistently ranked among the world’s best mile contests.

Not only that, Maurice travelled to Hong Kong where he captured the international Group 1 Longines Hong Kong Mile, before returning 6 months later to double his Group 1 feat by winning the Hong Kong Champions Mile.

As a 5YO Maurice departed racing on a memorable high, winning the Group 1 Tokyo Tenno Sho on home turf  before his swansong in Hong Kong, where he blew them away (by 3 lengths) in the Group 1 Hong Kong Cup.

Ultimately, Maurice would be allotted a World Thoroughbred Ranking of 217 in 2016 – the 3rd highest turf horse on the planet.

Maurice is the best son of Roberto-line stallion, Screen Hero, a winner of the Group 1 Japan Cup and from a daughter of Japan’s greatest ever stud influence, Sunday Silence.

Beaten a lip on debut at 2, OUR MISS BOSSY won her next outing at Morphettville, before going on to capture 5 wins throughout her career. A speedy customer who also won up to a mile.

The 2nd foal of OUR MISS BOSSY, it wouldn’t surprise to see this colt show similar speed.

His granddam, the SNIPPETS mare BROOKE’S EXPRESS, was a winner and multiple Group placed at 2, while she in turn is a ½ sister to Tasmanian Derby winner GEEGEES CLASSICBOY. That’s about the only middle-distance form on the page, and even the majority of his wins came over 1350m. It is a SPEED family.

Now take a look at some of this colt’s other relations: CHOICE BRO won 8 races including the Group 1 Manawatu Sires’ Produce at 2; CARGO CULT won 6 and was runner-up in the Group 1 Futurity; stakes winner IMMORTALITY – 8 wins to 1200m; PRESSING, a Listed winner at 2; and of course the lightning quick ABSOLUTE FLIRT, a stakes winner at 2 who ran 2nd to Magic Millions 2YO Classic winner EXHILIRATES in last year’s Group 3 Quezette.

Throw MAURICE into the mix and this bloke looks like he’ll go fast and go early!