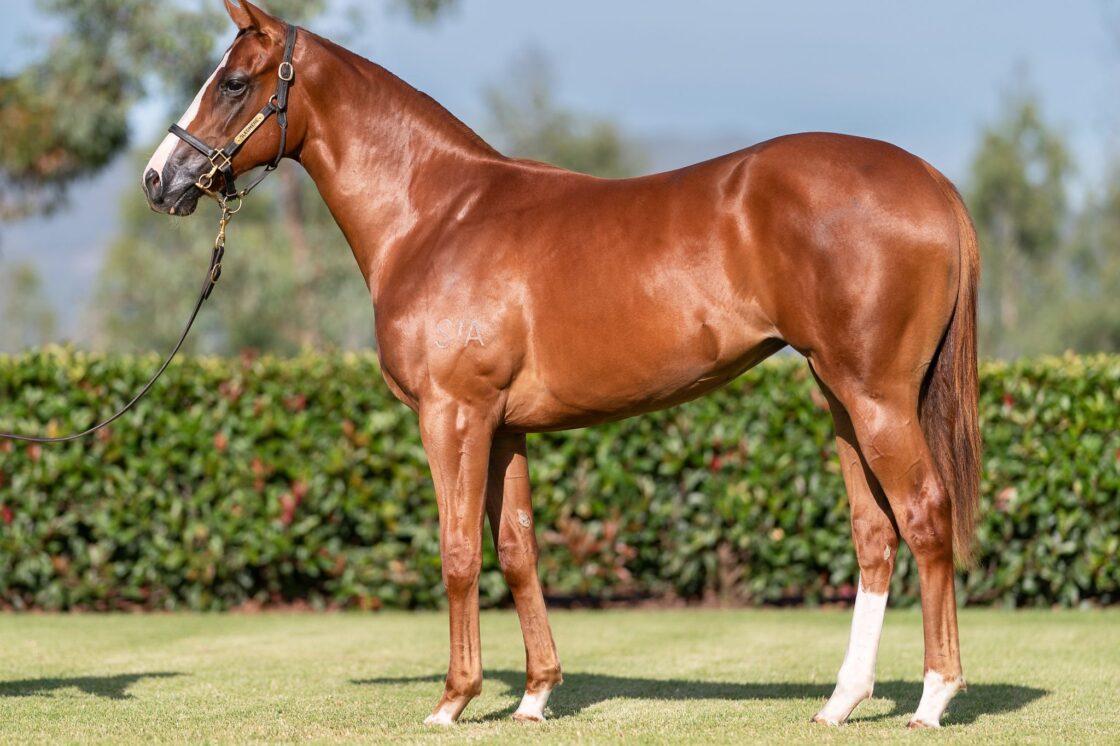 There are several reasons why MERCHANT NAVY is one of the most exciting young sires in Australia and he has already sired four winners from his first crop of 2YOS!

First off, he was unbeaten in 3 starts as a 2YO, including the Listed Anzac Day Stakes at Flemington. On his first start at 3, MERCHANT NAVY won the Group 3 McNeil Stakes defeating Booker, who would go on to capture the Group 1 Oakleigh Plate.

Perhaps his most notable victory however – certainly on these shores – was the Group 1 Coolmore Stud Stakes, known widely as the “stallion making race” given that previous winners include BRAZEN BEAU, ZOUSTAR, NORTHERN METEOR and more recently FLYING ARTIE and HOME AFFAIRS. MERCHANT NAVY also finished third – beaten a neck – behind REDKIRK WARRIOR in the time-honoured Group 1 Newmarket Handicap, prior to heading overseas where he ended his career with two major victories.

On his first and only start in Ireland, MERCHANT NAVY defeated a quality international field in the Group 2 Greenlands Stakes, before an incredible sign off against the world’s best sprinters in the Group 1 Diamond Jubilee at Royal Ascot. In taking out the Diamond Jubilee MERCHANT NAVY became only the 4th Australian horse to win the race – two of the others were Group 1 producing sires in CHOISIR and STARSPANGLEDBANNER, while the other was BLACK CAVIAR!

His race record of seven wins and two placings means that he failed to finish in the top 3 on only one occasion in 10 starts. A son of multiple Champion Australian sire FASTNET ROCK (167 stakes winners of $212 million in progeny earnings) – whose sire sons include HINCHINBROOK, FOXWEDGE & SMART MISSILE – MERCHANT NAVY is a full brother to Group 2 winner JOLIE BAY and to the dam of this season’s stakes winner HINDAAM. His dam is the multiple stakes winner LEGALLY BAY (by SNIPPETS).

In 2019/20, there was $808 million distributed in prizemoney throughout Australia with stakes increasing by 82% in the last 10 years: the highest of any racing nation in the world. There are also 72 races worth $1 million or greater in Australia – including 8 x 2YO races – whilst the phenomenal $15m The Everest is the pinnacle for the older horses.

This filly is also BOBS (Breeder Owner Bonus Scheme), and BOBS EXTRA eligible, which means she will be running for millions of dollars in extra bonuses over and above any prizemoney. For example (using some standard race figures):

Please complete the details below and we will touch base with you shortly.