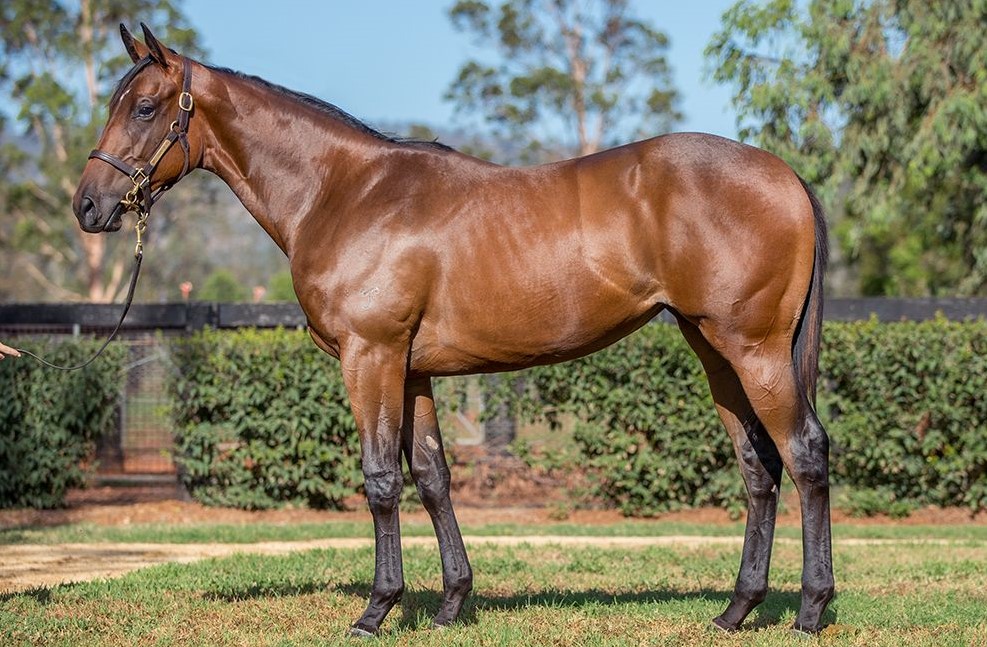 There is a lot of excitement around the PRESS STATEMENTs and when you see this filly, you’ll know why.

The filly is a magnificent type and really stood out as one of the best walkers at the sales complex. Good walkers are usually good gallopers and she is a great walker!

Although he’s only had a handful of runners thus far – including the recent city winner Spokesman – PRESS STATEMENT matches up really well with this pedigree.

Dig a little deeper though and you’ll find that this filly is closely related to Group 2-winning miler SHE WILL BE LOVED and multiple Group winning 2YO LUKE’S LUCK, but just as importantly, the family includes Kiwi Group 1 winning middle distance stars LUCIA VALENTINA and the cross Tasman performer DANZDANZDANCE (won Captain Cook & Zabeel Classic at successive starts and finished 3rd in the 2019 Group 1 Ranvet at Rosehill). A very exciting type!

PRESS STATEMENT was a brilliant juvenile who won 3 from 3 including the Group 1 JJ Atkins, which has been captured previously by leading sires such as Luskin Star, Zephyr Zip, Mossman, Show a Heart and Darci Brahma, while his ½ brother PRESSDAY also won the race.

A son of FASTNET ROCK’s ill-fated HINCHINBROOK (20 SWs from his first 4 crops including 4 Group 1 winners), PRESS STATEMENT trained on at 3 producing a further 3 wins and 3 Group placings. After winning the Group 1 Caulfield Guineas, Press Statement finished his career with a victory in the Group 2 Hobartville (easily defeating 3-time Group 1 winner LE ROMAIN), finished a neck second to LE ROMAIN in the Group 1 Randwick Guineas and then ran third behind WINX in the Group 1 George Ryder.

As well as being a ½ brother to another juvenile Group 1 winner, PRESS STATEMENT is out of the 9-time winner KAAPTIVE EMPRESS, who in turn is a ½ sister to the dam of Group 1 winner THE MIGHTY LIONS and Sydney stakes winner MARENOSTRO (10 wins). He is also closely related to Group winner and Group 1 ATC Oaks placegetter VAQUERA.

There is so much to like about this family given its blend of precocious speed and middle-distance performers. We believe she will make a terrific sprinter/miler – an ideal Guineas type.

This filly is the 1st foal of multiple-winning MAGIC ALBERT sprinter SOGNANI, who is in turn a ½ sister to Hong Kong sprinter SPRING WIN ($366,074).

SOGNANI’s dam, INANAME, was a dual winner over 1100m, but was also a ½ sister to 9 winners, among them the Group 2 Edward Manifold winner at Flemington SHE WILL BE LOVED, Group 2 WA Guineas runner-up (and sire) THORN DANCER, Flemington stakes-placed MYA and 4-time winning sprinter Red Queen, the dam of dual Group winning 2YO and 6-times stakes placed LUKE’S LUCK.

A lot of speed ‘up front’ for sure, but it is worth keeping in mind that other relations in this pedigree are dual Group 1-winning mare LUCIA VALENTINA and last season’s dual Group 1 winner DANZDANZDANCE (Captain Cook S., 1600m & Zabeel Classic, 2000m at successive starts) who also finished 3rd in the 2019 Group 1 Ranvet at Rosehill.