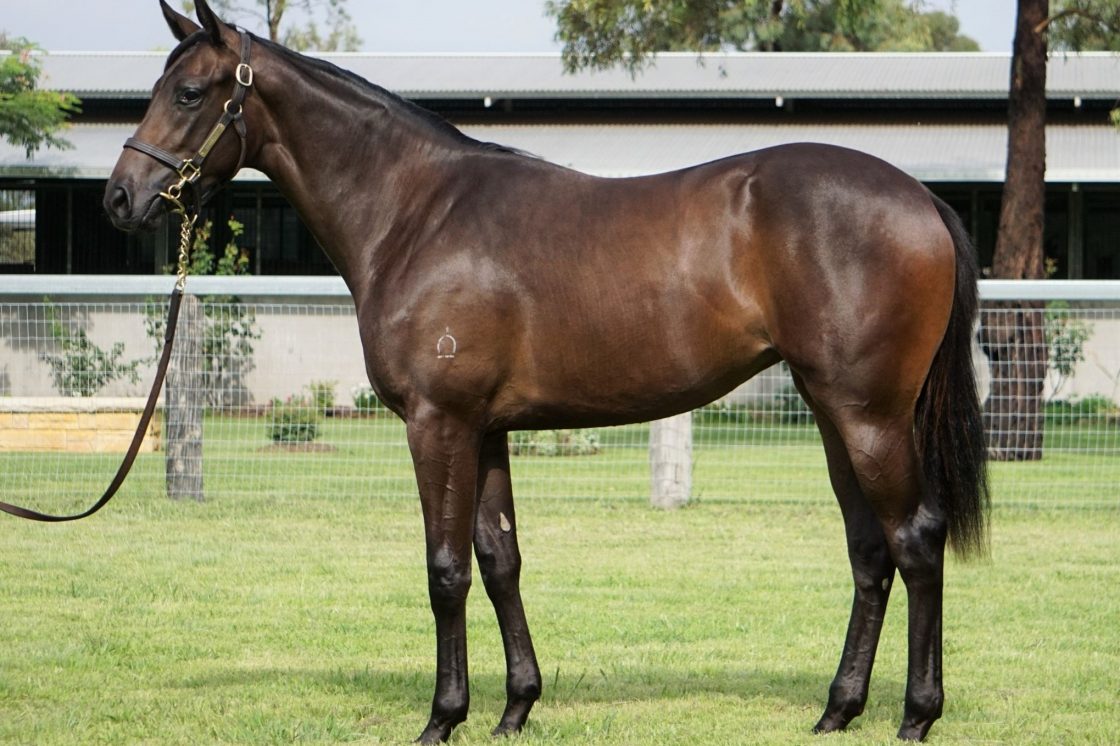 This filly really catches your eye and was easily one of the standouts of the sale. She’s a magnificent moving type and strikes us as the ideal type for Guineas or Oaks races!

What’s more, she offers plenty of residual value based on her pedigree alone. She’s by PRIDE OF DUBAI, the only 2YO to win the Group 1 Blue Diamond and Group 1 AJC Sires’ Produce, who hasn’t missed at beat at stud and is currently Leading Australian First Season Sire.

An added benefit, as far as we’re concerned, is that Peter and Paul Snowden trained PRIDE OF DUBAI – and they’re definitely keen to get this filly into their stable!

Her dam is a proven producer with 5 winners of 25 races, including the stakes placed pair of Black Jag and Longeron, while other close relations feature ENCORES, IRRADIATE and SIR LAURENCE.

See this filly’s magnificent walk for yourself by watching the video below.

So much to be ‘proud’ about … a multiple Group 1 winning 2YO who is now the Leading Australian First Season Sire!

Trained by the Snowdens, who will also train this filly, PRIDE OF DUBAI was one of the best 2YOs in the past decade, recording a brilliant victory in the Group 1 Blue Diamond Stakes before following up with an equally impressive performance in the Group 1 AJC Sires’ Produce Stakes. The only horse to pull off the double! Even more importantly, Sires’ Produce winners: PIERRO, HELMET, MANHATTAN RAIN and SEBRING have all gone on to sire Group 1 winners of their own in the last 2 years!

This is the first crop of yearlings by PRIDE OF DUBAI, who has been heavily supported at Coolmore Stud and is already off to a flyer with TANKER winning the Listed Debutant Stakes in the spring, while BELLA NIPOTINA recently ran 2nd by a head in the $2million Inglis Millennium.

What’s more, PRIDE OF DUBAI is a ½ brother to South African Champion ENAAD and Melbourne stakes winner AL ANEED. Additionally, he is out of a ¾ sister to yet another Champion Sire in INVINCIBLE SPIRIT (118 stakes winners and sire of Australian superstar stallion I AM INVINCIBLE). He is also closely related to leading 2YO Sire, KODIAC.

There is plenty of speed on the pedigree page, but don’t be surprised if this filly turned out to be a genuine Guineas or Oaks contender with a big turn-of-foot.

THUNDER GULCH mare I’M A SHOWOFF has really done the job since retiring to the breeding barn with 5 winners of 25 races, most notably the stakes pair of BLACK JAG and LONGERON. Showing incredible versatility, BLACK JAG won at 2 before capturing a further 9 races (& $630,000 in prizemoney) from 1200m to 2500m, grabbing top 4 finishes in 3 stakes races along the way. LONGERON – 9 wins and $500,000 from 1424m to 2040m – was equally versatile and was also a high-class runner.

Although PRIDE OF DUBAI is only a first season sire, the STREET CRY cross with THUNDER GULCH mares has already worked sensationally well : 3 winners from 3 runners including 7-time winner STREETFIRE.

This filly is also BOBS (Breeder Owner Bonus Scheme), and BOBS EXTRA eligible which means she will be running for millions of dollars in extra bonuses over and above any prizemoney. For example (using some standard race figures):