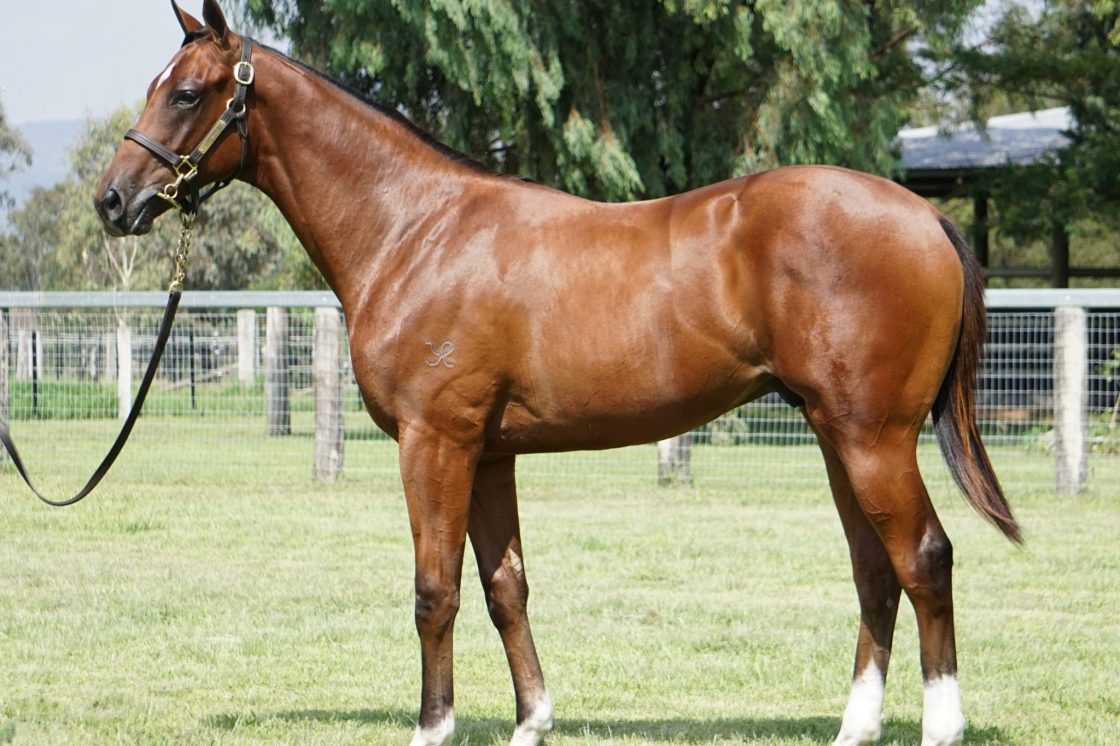 It’s hard to pass up the opportunity to purchase a colt by the speed machine RUBICK … especially one that moves so well and is from such a terrific sprinting family!

This colt really caught our eye with his incredible balance, strength and athleticism.

There’s always been a lot of talk around RUBICK – particularly as he was such a speedy son of Champion Sire ENCOSTA DE LAGO – but he’s just gone from strength to strength. In 2019 his yearlings sold up to $900,000 and that was before his star first-crop colt, YES YES YES, finished a lip 2nd in the Group 1 Golden Rose and then came out and won the $14 million The Everest. What’s more, his 3YO filly, RUBISAKI recently won the 2020 $1 million Inglis 3YO Sprint.

As for the family… it’s magnificent and this colt is the first foal of a ¾ sister to CAT D’ANTIBES, a stakes winner and multiple Group 2 placed sprinter as a 2YO.

This colt really looks like he’ll go early and he clearly has the sire and pedigree to back that up! A real sprinting type that we hope to target at all the big 2YO races!

One of the most exciting young stallions in Australia. A Group winning 2YO, a Group 2 winning 3YO, a son of Champion Sire and Sire of Sires in ENCOSTA DE LAGO and from a ¾ sister to Champion Sire REDOUTE’S CHOICE! What’s more, he’s off to flyer with his oldest progeny – 3YOs – including 8 stakes horses – spearheaded by $14 million The Everest winner YES YES YES.

Timeform’s highest rated juvenile colt of his year (115), RUBICK won his first two starts at 2: He recorded a scorching time of 56.39 seconds when winning on debut before landing the Blue Diamond Prelude. Installed as second favourite in the Group 1 Blue Diamond, he finished a game fourth.

RUBICK matured into an outstanding 3YO, leading throughout in the Group 2 Schillaci Stakes (in a faster time than BLACK CAVIAR recorded in the same race) before another bold performance in the Group 2 Challenge Stakes when third behind Group 1 winner MIRACLES OF LIFE.

With that kind of race record, it was a given that RUBICK would become a popular stallion, particularly when you take into account his marvellous pedigree.

First off, RUBICK is by the Champion Australian Sire ENCOSTA DE LAGO (114 stakes winners of $177 million) whose sire sons include NORTHERN METEOR and MANHATTAN RAIN. Interestingly, as a 3YO, RUBICK was rated equal to the Group 1-winning sprinter NORTHERN METEOR (sire of DEEP FIELD, SHOOTING TO WIN, ZOUSTAR etc.)

However, it’s RUBICK’s female family that has everyone taking notice!

RUBICK hails from the multiple stakes winner SLIDING CUBE (unbeaten at 2), who is in turn a ¾ sister to REDOUTE’S CHOICE and Group 1 winner PLATINUM SCISSORS. She is also closely related in blood to MANHATTAN RAIN and his full brother, the stakes winner and Group 1 Derby runner-up ECHOES OF HEAVEN.

With RUBICK’s progeny selling up to $900,000, he’s been an immediate sensation with YES YES YES (Group 2 Todman winner at 2, 2nd in the Group 1 Golden Rose and the $14m The Everest winner), 2020 $1 million Inglis 3YO Sprint winner RUBISAKI, plus multiple Group placed CONDO’S EXPRESS and multiple stakes placed 2YO KRAMERIC among his early runners.

A daughter of the prolific TALE OF THE CAT (broodmare sire of 95 stakes winners – 8 Group 1 winners!), TALE OF FUN is a ¾ sister to CAT D’ANTIBES, a stakes winner and multiple Group 2 placed at 2. The bloodlines are exceptional.

This colt is the first foal of TALE OF FUN, who is also out of a ½ sister to the dams of Group 1 Golden Slipper winner MOSSFUN (also Group 2 Silver Slipper & Group 3 Widden Stakes winner), 3-time stakes winning sprinter ARAMCO (11 wins and nearly $1 million in prizemoney), plus the dual stakes winner EXIMIUS ($500,000 in prizemoney).

This is one very impressive family, as other relations include the ill-fated but successful sire BRAVE WARRIOR (sire of SHOW A HEART etc), Champion Miler ABLE ONE, Group 1 winners REBEL RAIDER, RISING ROMANCE and A LITTLE KISS along with other notable stakes winners such as SHAMOLINE WARRIOR, TARAAYEF and JUNGLE EDGE etc.

Interestingly, the sires of the first 3 dams – TALE OF THE CAT, DANZERO and CANNY LAD – have all produced multiple Group 1 winners both as sires and damsires.