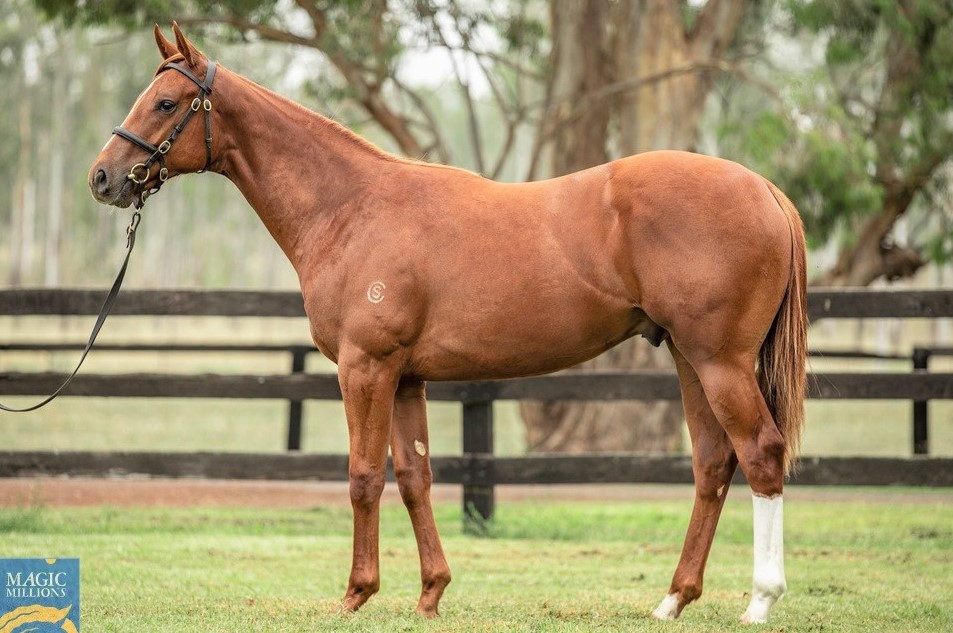 There was just so much to like about this colt. Not only does he remind us of SEBRING, who had similar white markings (right down to the long white sock), but he’s also reminiscent of his granddam, KARUTA QUEEN, who won the Magic Millions 2YO Classic in a canter.

It’s worth remembering that Sebring – a Golden Slipper winner and Champion 2YO Colt – has produced a host of speedy youngsters who also trained on at 3, 4 and beyond! That’s pretty much the case with this colt’s entire family: while this bloke is just the 1st foal of Infliction, his next 3 dams produced 14 winners from 16 runners… all of them sprinters and, in the main, all of whom ran early and trained on.

Karuta Queen is a stand-out example – She won her first 4 races including the Magic Millions 2YO Classic (by 2.8L), before training on to be a multiple Stakes winner as a 3YO and runner-up to wondermare Black Caviar in a Group 1 as a 4YO.

The real clincher for us though, is that this colt is a ¾ brother in blood to 2YO stakes winner & 3YO stakes-placed EAWASE, who was trained by Peter & Paul Snowden. The fact that Peter & Paul have already had great success with this family, made our purchase even more of a no brainer! 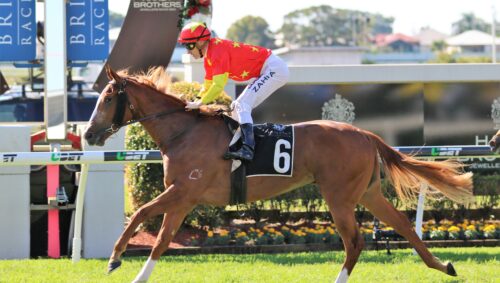 Peter & Paul Snowden trained Eawase to Stakes success as a 2YO – They will also train our Sebring colt, who is a three-quarter brother to Eawase.

SEBRING has been a remarkable stallion throughout his stud career. With his Group 1 winners successful from 1000m to 2400m, Sebring boasts close to 70% winners to runners, with a strike rate for stakes horses at nearly 14%. Represented in 2020 by Group 1 Doncaster heroine Nettoyer, it’s hardly surprising that his yearlings have sold up to $825,000 and $800,000 in the last 2 years.

Meanwhile, SEBRING’s sire, MORE THAN READY (206 stakes winners!), has sired more winners than any other stallion in history and is one of the world’s great speed sources. SEBRING didn’t disappoint, winning the Group 1 Golden Slipper, Group 1 AJC Sires’ Produce (and 3 other races at 2), ultimately being named Champion 2YO Colt.

Like often begets like – this colt is a flashy chestnut (even has the white sock on the back leg!) – but while SEBRING has produced more than his share of speedy 2YOs, his versatility is phenomenal and his runners include Horse of the Year DISSIDENT (7 wins inc. Group 1 Randwick Guineas), EGG TART (Group 1 Queensland Oaks) and the Champion CRITERION (Group 1 Queen Elizabeth Stakes, Group 1 Rosehill Guineas, Group 1 Australian Derby, etc.). However, given that this colt is the 1st foal of a daughter of a MM 2YO Classic winner & ¾ brother to a 2YO stakes winner, this pedigree screams EARLY SPEED!

Sadly, SEBRING is no longer with us and this colt forms part of his last crop, but this season he has already produced some 70 winners of just under $5 million.

Well worth noting too is that SEBRING’s ‘nick’ with NOT A SINGLE DOUBT (sire of the colt’s 2nd dam) has already produced a 2YO stakes winner in EAWASE & 5-time winner CABOCHON LIL.

This pedigree absolutely smacks of precocious speed. A colt by a Golden Slipper winner and major speed source in SEBRING and the 1st foal of a daughter of Magic Millions 2YO Classic winner KARUTA QUEEN (whose filly sold for $1.5 million at last year’s Gold Coast Magic Millions). 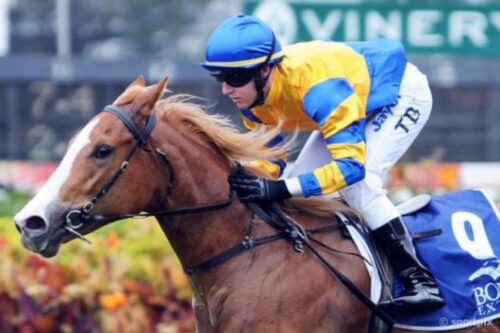 Meanwhile, this colt is a ¾ brother in blood to SEBRING’s 2YO stakes winner EAWASE, who defeated subsequent dual Listed winner Granny Red Shoes in the Bill Carter Stakes, before training on at 3 to finish 2nd in the Listed Twilight Glow Stakes. Significantly, EAWASE was trained by Peter and Paul Snowden!

As for KARUTA QUEEN, she’s just like this colt in that you’d never miss her in a crowd! A phenomenal 2YO who won her first 4 starts – including the Magic Millions 2YO Classic by 2.8 lengths – Karuta Queen was a multiple stakes winner at 3 (AND multiple Group placed) before capping her career with a 2nd to BLACK CAVIAR in the Group 1 William Reid Stakes.

Karuta Queen’s dam – CARD QUEEN – was a 2YO Group winner in her own right having taken out the Group 3 Blue Diamond Prelude for Fillies. This colt – both in the flesh and on the page – has early sprinter written all over him and will be aimed at the 2022 Magic Millions 2YO Classic.

Click here to watch Katuta Queen run out an emphatic winner of the Magic Millions 2YO Classic!

The colt is also BOBS (Breeder Owner Bonus Scheme), and BOBS EXTRA eligible, which means he will be running for millions of dollars in extra bonuses over and above any prizemoney. For example (using some standard race figures):