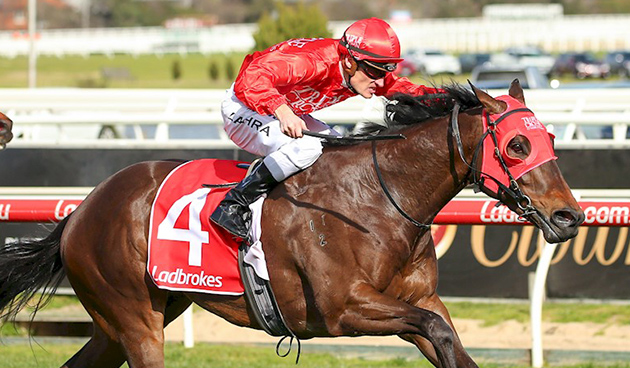 AS Sydney’s festival feast of racing draws nearer, the wheels on the Autumn Carnival wagon are starting to spin at an increasingly vociferous pace, and Triple Crown and Snowden Racing are preparing a team for battle.

The (new Hyland Stretch!) red silks of Triple Crown will be a prominent feature at Sydney’s metro racetracks throughout the coming months, and it all gets into motion this weekend.

On an afternoon where supermare Winx makes her reappearance, Dothraki is set to contest the Group 3 Southern Cross Stakes (Race 6) at Randwick where he will face nine rivals and jump from barrier 3 under Tye Angland.

The son of Mossman has acquitted himself well since his superb fourth-place finish in the Magic Millions Sprint on the Gold Coast and is looking in pristine condition ahead of a highly-anticipated campaign competing for Sydney’s premier riches.

Later targets will emerge for the six-year-old, with the Group 3 Maurice McCarten Stakes a potential next port of call on March 11.

Trainer Peter Snowden has been happy with his work since his effort on the Gold Coast: “He’s in pretty good order and this looks like a pretty nice race for him on paper,” he said. “He looks as though he holds a class edge over his rivals and it will be good to see him get back to winning form.”

Redzel is being primed for an exciting preparation ahead, and the Mumm Stakes winner has the Group 2 Challenge Stakes within his sights on Saturday March 4 at Randwick, although the Group 1 Lightening Stakes remains an option a week earlier. The son of Snitzel won his recent trial at Warwick Farm in impressive fashion, flashing from the barrier to make all the running under Kerrin McEvoy.

The four-year-old has tasted previous Sydney Carnival success when leaping out the gates to explode clear in the Listed Fireball Stakes at Randwick on March 4, 2016 and hopes remain that he can step up to Group 1 level this campaign.

McEvoy said after his trial: “He bounced out in typical fashion and went forward. After bowling along at his own leisure I then just picked him up passing the 600 and he finished it in nice style. He’s in good order.”

Also in Group action this weekend is Denpurr, as she has made the trip to Melbourne to contest the Bellmaine Stakes over 1200m. With the recent downpour of rain in Sydney the drier track at Caulfield posed the more attractive option for the four-year-old mare, and her Sydney plans will be established in the wake of her weekend run.

← Onslaught wins Canterbury thriller
Three of the best: Inglis Classic Yearlings to race in The Red →
Tweets by @TripleCrownSynd