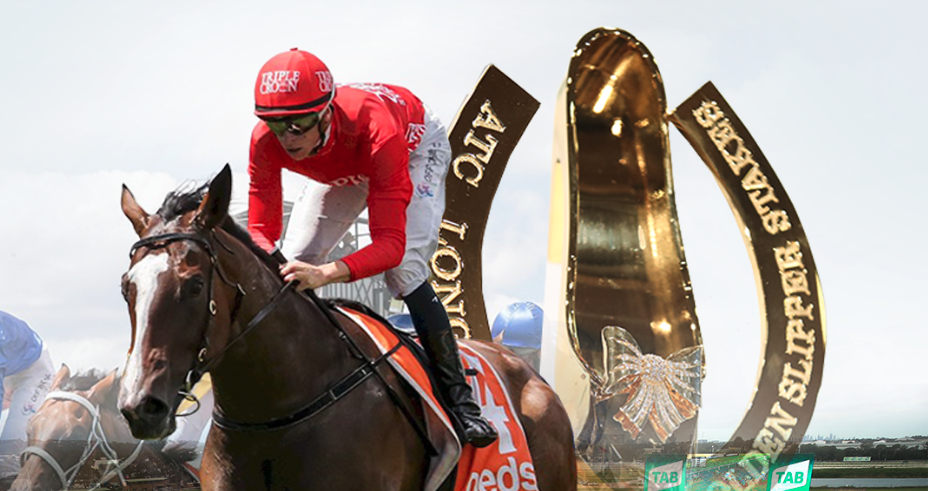 The 1995 Golden Slipper (Gr 1, 1200m) has, so far, had the greatest impact of any two-year-old race on Triple Crown Syndications, even though the business itself was not established until more than a decade later. But that could change tomorrow when their filly Revolutionary Miss (Russian Revolution) becomes the fifth representative for the ownership group in the $5 million feature.

The 1995 race is best remembered for the rails run of Flying Spur (Danehill) under replacement rider Glen Boss, who secured the mount on race morning from the suspended Jimmy Cassidy. A Blue Diamond Stakes (Gr 1, 1200m) runner-up, just like Revolutionary Miss, Flying Spur came through to defeat Octagonal (Zabeel) by a long head in a vintage edition that also included juveniles like Our Maizcay (Maizcay), Strategic (Zeditave) and Ravarda (Rave Report).

However, it was third-placed Millrich (Rubiton) that would turn out to be the life changer for Triple Crown owners more than two decades later when her final foal, Redzel (Snitzel), went down as the first – and second – winner of The Everest (1200m). His two victories in the world’s richest turf race under Kerrin McEvoy took his earnings beyond $16 million and cemented Triple Crown directors Chris and Michael Ward among the biggest players in the syndication business.

“Flying Spur, Octagonal and Millrich – what a trifecta that was and it is great to see all three of them go on to have a big influence on the breeding side having produced some outstanding racehorses in subsequent generations,” Chris Ward told ANZ Bloodstock News yesterday.

The Triple Crown red and white colours that are now so etched in Australian racing folklore were first worn in a Golden Slipper 16 years later when subsequent Group 1 winner Hot Snitzel (Snitzel) finished 12th to Sepoy (Elusive Quality) in 2011. A year later, Cavalry Rose (Charge Forward) would finish a late-closing eighth in Pierro’s (Lonhro) Slipper, while Charlie Boy (Myboycharlie) and Dothraki (Mossman) would finish eighth and 16th respectively in 2013.

Since then, though, they have not had a Golden Slipper runner, but in 2022, they head to Rosehill with arguably their greatest chance yet in the Peter and Paul Snowden-trained Revolutionary Miss, to be ridden by McEvoy.

“The Golden Slipper ownership experience has always been amazing,” Ward said. “We are in the fortunate position to share those experiences with different ownership groups and to see the unbridled joy and excitement they get from competing in time-honoured races like the Golden Slipper, it’s hard to explain. These are experiences that cannot be replicated anywhere else and to have played a part in helping provide these life experiences to people is very satisfying.

“Obviously it is an almighty thrill for anyone to have a contender in the Golden Slipper but from a business point of view, it is an important bonus that people see our red silks competing and winning in these big races. It just demonstrates what is possible for anyone looking to get into racehorse ownership and that these types of life experiences are open to anybody keen to get involved.”

Revolutionary Miss has won only one of her four starts, taking the Blue Diamond Prelude (Gr 2, 1100m) for fillies at Caulfield in February. However, her form otherwise has been solid with three runner-up finishes: on debut to subsequent Sweet Embrace Stakes (Gr 2, 1200m) heroine Fireburn (Rebel Dane), in the Widden Stakes (Gr 3, 1100m) behind Black Opal Stakes (Gr 3, 1200m) winner Queen Of The Ball (I Am Invincible) and when producing arguably the run of the race in the Blue Diamond Stakes behind Daumier (Epaulette) last start.

Unlike fellow Blue Diamond runners Daumier, Jacquinot (Rubick) and Sebonack (Capitalist), as well as third emergency Semillion (Shalaa), Revolutionary Miss has had the benefit of two races in Sydney.

“It’s always an extra challenge for the Melbourne horses to come to Sydney and go in our direction for the first time,” he said. “They need to get on the right leg and adapt straight away, which some will and some won’t. Revolutionary Miss has been Sydney based and has done all her work the Sydney way except for the lead up to her two runs down south so she won’t have any dramas on that front.

“The only question mark with her following on from the Blue Diamond is the fact that this will be her fifth run in her first prep. It’s been a pretty full prep but she is showing no signs of being over it and Peter, Paul and Kerrin couldn’t be happier with her work so we are expecting her to perform very well.”

Sydney’s big wet has muddied the Golden Slipper picture this year, with each of the main lead-ups since the Silver Slipper (Gr 2, 1100m) a month ago run on rain-affected tracks – something that Revolutionary Miss has managed to avoid.

“It’s definitely a plus,” he said. “You just never know how much of a toll these recent heavy tracks will take on a horse, especially two-year-olds. That’s one aspect that we don’t have to worry about.

“It’s possible that the Blue Diamond is the right form race but it is very hard to know this year. It is such an open race and most of the lead-up performances have been pretty even across the board. Throw in a few horses having lead-up runs on bog tracks or unconventional preparations and it will be a tough ask for people punting with absolute confidence.”

One potential negative is a wide draw, with Chris’s brother, Mike, pulling out gate 17 for Revolutionary Miss in Tuesday’s barrier draw. However, given the possibility of a soft track, that may not be as difficult as it appears on paper.

“I was calling for Mike’s head when he drew barrier 17!” Ward said, laughingly. “But she should jump from barrier 14 and Mike was quick to point out that there have been six previous winners from barrier 14. We will need some luck in the first furlong when finding a position but there are some other good horses out a bit wider, too, so hopefully Kerrin can find the back of the right one who will take her into the race. I wouldn’t be surprised to see her flashing down the outside late and let’s pray she sprouts wings and gets there in time.

“Kerrin is all class. He is a very reliable and consistent jockey who gives every horse its opportunity to produce its best. His composure has been noted in the big races which is why we were keen to have him on board. We have obviously had a lot of success with Kerrin in the past with the likes of Redzel and many others, so we know Revolutionary Miss is in safe hands on Saturday.”

From the first crop of Newgate Farm’s Russian Revolution (Snitzel), Revolutionary Miss is the second foal to race out of New Zealand mare Purcentage (Onemorenomore), who herself is out of the Group 1-placed Spurcent – fittingly for Triple Crown, a daughter of Flying Spur.

Offered by Sledmere Stud at last year’s Magic Millions Gold Coast Yearling Sale, Ward said that they were taken by the bay filly the moment they saw her and were thrilled to secure her for $195,000.

“We first inspected her on farm at Sledmere Stud prior to the sales,” he recalled. “As soon as she walked out of the barn I said to Mike ‘she’s a ripper’ and thankfully he agreed. She immediately caught the eye as just a beautifully balanced and athletic type. We know Sledmere raise their horses well and she was an obvious target from that moment.

Russian Revolution will join rare company with three Golden Slipper runners from his first crop, making him the third stallion since the turn of the century to achieve that feat. He joins his Newgate Farm barnmate Capitalist (Written Tycoon), who had three runners from his first crop last year, as well as Fusaichi Pegasus (Mr. Prospector) in 2003.

Champion first season sires such as Flying Spur, General Nediym (Nediym), Redoute’s Choice (Danehill), More Than Ready (Southern Halo), Exceed And Excel (Danehill) and Written Tycoon (Iglesia) had only one runner each in the Slipper from their inaugural crops, while Choisir (Danehill Dancer) had two. Even the remarkable Danehill (Danzig) had two runners in his first season.

Ward believes that the Russian Revolutions will continue to prove popular for years to come.

“I love them,” he enthused. “We obviously watched his career very closely when he was running for the Newgate and China Horse Club team under the Snowdens’ training and knew what a talent he was. As soon as he went to stud, we were keen to find some good ones from his stock.

“He has certainly started his career at stud in blazing style and it’s no mean feat to have three runners in the Golden Slipper with a stallion’s first crop, so Newgate has another very smart stallion on their roster with a big career in front of him.”

While the focus is rightly on tomorrow’s feature, there is always one eye on the future, particularly with the yearling sale season about to reach its zenith with the Inglis Australian Easter Yearling Sale next month.

However, for Triple Crown, most of their buying has already been done through a bumper season that saw them acquire three yearlings at the Magic Millions Gold Coast Yearling Sale – including a filly by Russian Revolution – as well as five youngsters at the Inglis Classic Yearling Sale and a further four from the Inglis Premier Yearling Sale.

“The buying has been tough but good,” he said. “Racing in Australia is thriving and going from strength to strength with prize-money increases seeming almost commonplace these days. Off the back of such a healthy industry, it is no surprise to see the sales figures all go up as well.

“Everybody operates differently but we work incredibly hard in the lead up to selecting and hopefully buying our horses. There are always good opportunities if you have thoroughly done your homework and we have been particularly pleased with the crop of horses we have managed to get this year.

“I’m sure there are some very exciting times ahead for our owners and we can’t wait to see how it all unfolds.”

← Mazu out to make it a truly Golden day at Rosehill
‘This is the one that counts’: Snowdens to get Slipper timing right →
Tweets by @TripleCrownSynd