The last 8 weeks have seen an amazing run of success for Triple Crown Syndications and their lucky team of owners. In this period they have had 7 individual winners (including 3 stakeswinners) and a further 4 stakes placings.

It all started with the 3-time metropolitan winning Snitzel mare Centrepet, who won a tight finish at Warwick Farm under the urgings of Brenton Avdulla and in the process took her earnings to in excess of $188,000. Centrepet will now have one more start and her first attempt over 1400m this Saturday at Royal Randwick before going through the ring in the upcoming Magic Millions sales at the end of the month. 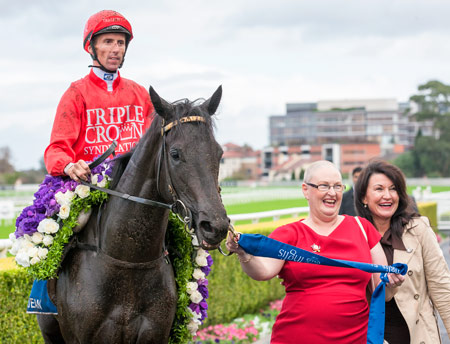 Then it was the exceptional 2yo Peggy Jean who won the $1,000,000 Group 1 Sires’ Produce Stakes at Royal Randwick with Nash Rawiller aboard on the first day of ‘The Championships’ in a dominating display. Peggy Jeanhas now amassed over $900,000 in prizemoney so far from just 6 race starts, not to mention increasing her own value to well over seven figures.

Hot Snitzel was the next Triple Crown runner to salute when he and Hugh Bowman made light work of the opposition in his decisive win of the $150,000 Group 3 Hall Mark Stakes at Royal Randwick. This was his seventh win (sixth at stakes level) and took his earnings to $885,350. Victory in this Saturday’s Group 1 Doomben 10000 would see him hit the goal that Triple Crown set for him of $1,000,000 in career prizemoney for his owners.

The successful Sydney Autumn carnival came to a close so the highly talented Dothraki travelled up to the Gold Coast to claim the $125,000 Group 3 Gold Coast Guineas. This quality son of Mossman is still a work in progress with Nash Rawiller commenting after the race that he couldn’t believe he still won after the horse started pulling up thinking the job was done with a 100m to go. This was Dothraki’s third win (second at stakes level) and took his career earnings to over $357,000 so far in his short career. He will next line up in Saturday week’s $350,000 Group 2 Queensland Guineas.

Triple Crown’s winners kept flowing and were rounded out by Snitziola who claimed victory at Gosford in his second career start when ridden by Nash Rawiller. He showed his inexperience and did plenty wrong but was still too good for his rivals. The team’s focus then shifted down to Melbourne where the speedy Wild Fire won impressively at Sandown with Linda Meech as pilot. This took his tally to 2 wins from just 4 starts to date. A week later saw a barnstorming win by the very exciting Belesron at Moe by 5.5 lengths with Luke Nolen in the saddle. This was Belesron’s second win from just three starts (both by big margins) and he is horse to keep in your black book.

“It was a magnificent Autumn carnival for our team and hugely rewarding for our owners” said Triple Crown’s Chris Ward. “It is very satisfying when all the hard work pays off and you get the results that you are striving for. It’s been incredible sharing these experiences with our owners and seeing them get just as much joy and exhilaration out of it as we do. The Brisbane Winter carnival has now already started with a bang for us too and there are a number of other stakes races that we are targeting up there in the coming weeks so fingers crossed.”